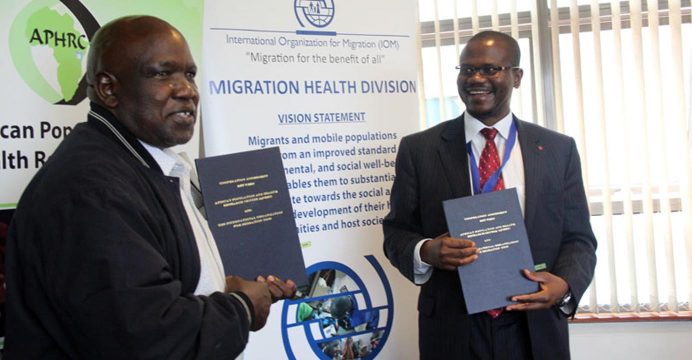 Speaking at the signing ceremony at APHRC, IOM Southern Africa Regional Director Josiah Ogina said: “This agreement is timely given that migration is now part of the UN Sustainable Development Goals. We hope that it will see IOM and APHRC jointly develop more funding proposals and conduct outstanding research that will provide much-needed evidence relating to migration and health in East and Southern Africa.”

APHRC Executive Director Dr. Alex Ezeh said: “We are deeply interested in issues of migrants and health. We understand refugee populations are a major challenge in Africa. Migration plays a major role in the health of urban populations. We would like to identify opportunities where IOM and APHRC can work together. Let us look for opportunities jointly to fund research on migration and health. We want to create knowledge that will inform such issues through this partnership.”

IOM and APHRC first signed a cooperation agreement in June 2013 to collaborate in areas of mutual research interest. This partnership resulted in a joint report entitled Regional Synthesis of Patterns and Determinants of Migrants’ Health and Associated Vulnerabilities in Urban Settings of East and Southern Africa.

The report, which combines IOM’s migration and health data with APHRC’s Nairobi Urban Health and Demographic Surveillance System data was finalised in 2015 and will be launched shortly. APHRC plans to embark on a secondary analysis of the data addressing mixed migration from the Horn of Africa through the Great Lakes to South Africa.

The agreement and associated research activities are part of the Partnership in Health in Mobility in Eastern and Southern Africa (PHAMESA), a Swedish International Development Cooperation Agency (Sida)-funded IOM project.