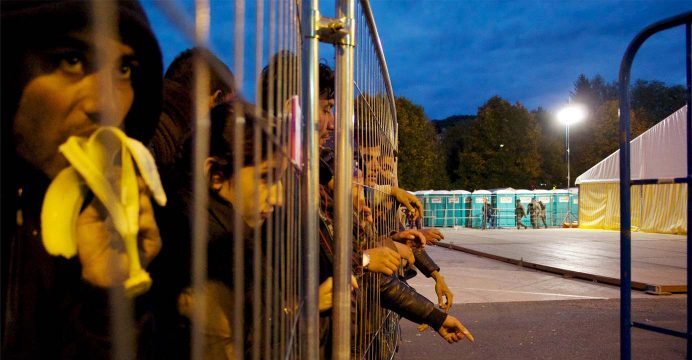 At the occasion of the third Western Balkans Summit, today in Paris, AEDH, EuroMed Rights and the FIDH denounce the complete denial by the head of States in relation to the issue of the dignified reception of migrants and refugees travelling on the Western Balkan route.

During this meeting, the heads of governments of six states of the European Union (Germany, Austria, Croatia, France, Italy, and Slovenia) and of six countries of the Western Balkans, the President of the European Commission and the High Representative of the Union for Foreign Affairs and Security Policy have focused on various topics without including to the agenda the crucial issue of the reception of migrants and refugees.

The closure of the Western Balkan route for several months has been imposed by the EU which has largely offloaded its international obligations to its Balkan neighbours and imposes on them the externalisation of its border management, thereby generating explosive, violent and inhuman situations. Such a policy is emblematic of the EU’s rejection of migrants and refugees as the closure and even the militarisation of the borders of Hungary, Slovenia and Bulgaria have shown.

In a statement that almost sounded like a victorious stance and while thousands have borne the brunt of this policy with all its consequences for several months, the European Council observed on 8 March 2016 that “irregular flows of migrants along the Western Balkans route have now come to an end”.

This seems to suggest that the problem may have been solved when in fact these people have not disappeared. Pushed away to the periphery, far from the EU’s sight, at the margins of the territory and of the law, those deemed “undesirable” seem to have also become invisible although the situation has not really changed: appalling conditions, no access to rights, deprivation of liberty for many, wandering in limbo for most, and the remaining and urgent issue of reception and respect of fundamental rights still at stake.

However, the EU heads of states or governments want to further externalise their international responsibilities as regards the reception of asylum seekers and migrants: a draft regulation is currently debated at the EU level that provides for the adoption of a list of “safe” countries of origin, among which Western Balkan states, where asylum seekers may be returned to.

AEDH, EuroMed Rights and FIDH warn against the use of the concept of safety in processing asylum applications (see analysis). The notion contradicts the right of asylum and to the principle of non-discrimination on grounds of nationality enshrined in international law.

No country can be presumed safe for all its citizens, as our organisations have exposed through country factsheets (Albania, Bosnia, Herzegovina, Kosovo, FYROM, Montenegro)1. The use of the concept of “safety” has serious consequences on asylum seekers’ rights: expedited examination of applications and non-suspensive appeals against rejection of asylum applications for example.

Our three organisations call on the heads of governments participating in the Balkan Summit to put an end to this unrestrained logic of border securitisation and to fully abide by their international obligations by making the protection of the rights of migrants, asylum seekers and refugees a priority.

This means the opening of safe and legal routes to EU territory so as to allow people trapped in inhumane conditions at the Western Balkan borders states to apply for international protection, as well as the end of blatant discrimination by making the border crossing accessible only to nationalities considered in “real need of international protection” as it has been the case in Idomeni (Greece).

Our organisations also call on the EU leaders to provide support to these countries in order to guarantee dignified reception conditions for everyone, whether international protection seekers or not. AEDH, EuroMedRights and FIDH urge the European Union and its Member States to drop the project of adoption a common list of “safe” countries.