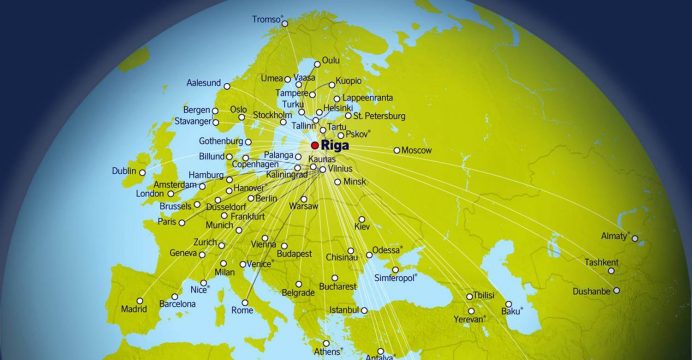 Konstantins Palgovs, General Manager of Tez Tour in the Baltics: “We are happy to launch flights to our 21st destination in co-operation with airBaltic – Rimini in Italy. Rimini is one of the most famous seaside resorts in Italy with beautiful beaches and historic sightseeing opportunities. My Top 5 attractions in Rimini are the town centre including Northern Italy’s oldest Roman triumphal arch Arco d’Augusto (Arch of Augustus), the impressive Ponte di Tiberio (Tiberio’s Bridge), Parco Federico Fellini(the park named after famous director Federico Fellini) and The Rubicon (the name of river that was famously crossed by Julius Caesar). From Rimini it is also convenient to travel to other cities in Italy, for example to Bologna, or to the oldest European country – San Marino.”

Rimini town centre has many historic and cultural sights and hangouts, from very colourful buildings, incredible wall paintings and narrow streets to great restaurants and cafes.

Arco d’Augusto (Arch of Augustus) is Northern Italy’s oldest Roman triumphal arch, which was built in honour of Cesare Ottaviano Augusto in the Roman era, 27 B.C. It is the most iconic and impressive monument in the city that highlights the importance of Rimini in the Roman era.

Ponte di Tiberio (Tiberio’s Bridge) was built by the Romans between 14 and 21 A.D. The bridge has a remarkable construction. Despite the ebbs and flows of nature, the numerous wars in the past and modern day traffic –it still remains in use today.

Parco Federico Fellini is a park named after famous director Federico Fellini who was born in Rimini. In the park you will be able to enjoy great weather and beautiful nature as well as the La Fontana dei Quattro Cavalli – the four horses fountain that is a Rimini landmark.
The Rubicon River runs for about 80 kilometres from the Apennine Mountains to the Adriatic Sea through the southern Emilia-Romagna region, between the towns of Rimini and Cesena. The Rubicon in 49 B.C. marked the border between Rome and what was known as Cisalpine Gaul (Northern Italy). The Rubicon is well known as the river that was crossed by Julius Caesar when he effectively declared war on the Senate.
airBaltic operates the flight for Tez Tour from Riga to Rimini once a week. Passengers will board a Boeing 737-500 aircraft for a flight that will last 2 hours and 40 minutes. Passengers on these charter flights are offered full onboard catering in Economy Class. The Premium Class customers can enjoy their customised pre-ordered meals and seats in the front part of the cabin, as well as dedicated check-in counters. The Riga – Rimini operation also has a full Business Class service that includes additional amenities and privileges such as airport business lounges. For a full schedule and holiday offers, visit teztour.lv

airBaltic serves over 60 destinations from its home base in Riga, Latvia. From every one of these locations,airBaltic offers convenient connections via Riga to its network spanning Europe, Scandinavia, CIS and the Middle East. In addition, airBaltic also offers new direct flights from Tallinn, Vilnius and the Baltic seaside resort of Heringsdorf.