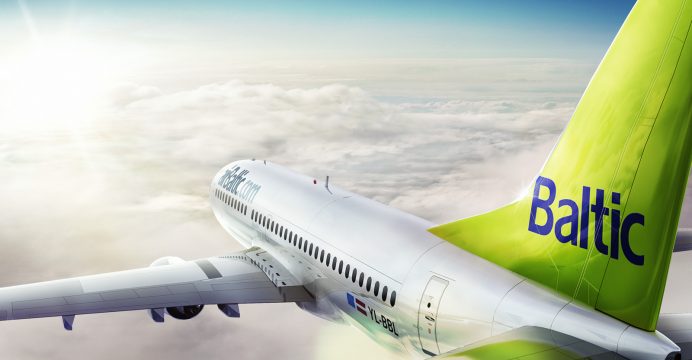 Latvian airline airBaltic has launched a new initiative “E-GEN” to further improve its green flying, as it sets out to reduce emissions and cost.

Pauls Cālītis, Senior Vice President Flight Operations of airBaltic: “airBaltic was the first airline in Europe to start green flying for turboprop aircraft four years ago, when we introduced satellite-based approach procedures at Riga Airport for our Bombardier Q400 Next Gen. Now we want build on that experience and introduce the latest technological achievements in our green flying under the E-GEN project, and this will further cut emissions and costs, especially when our brand new BombardierCS300 jets enter service later this year.

This initiative in correlation with our investment into the Bombardier CS300 jets means that we will be consuming up to 20% less fuel. The capability of the aircraft and its new engine, combined with airBaltic’s robust fuel conservation programme and green navigation initiatives, will reduce CO2 and NOX emissions by 20% and 50% respectively. At the same time, airport neighbourhoods will be up to four times quieter than before the introduction of this state-of-the-art aircraft.”

The “E-GEN” project is co-sponsored by the European GNSS Agency and will enable the entire airBaltic fleet to use satellite-guided approaches. EGNOS, the European Geostationary Overlay Service, is a satellite based augmentation system improving the performances of the current GPS system. With the increased performances, EGNOS enables satellite based technologies for approaches. This will offer additional benefits for the customer, as it improves airBaltic operations in marginal weather conditions, reduces fuel burn, emissions, and the noise level in the airport neighbourhoods.

As announced previously, airBaltic is operating a 12 aircraft Bombardier Q400 Next Gen turboprop fleet, and is set to further modernise and introduce 20 all-new Bombardier CS300 jets, with the first aircraft arriving later this year. The all-Bombardier fleet will be instrumental in improving the connectivity of the Baltic region with Western Europe and the Eastern markets. As part of the Horizon 2021 plan, airBaltic will operate 11 direct routes out of Tallinn and Vilnius in the next five years, in combination with convenient transfers via Riga.

airBaltic serves over 60 destinations from its home base in Riga, Latvia. From every one of these locations,airBaltic offers convenient connections via Riga to its network spanning Europe, Scandinavia, CIS and the Middle East. In addition, airBaltic also offers new direct flights from Tallinn, Vilnius.