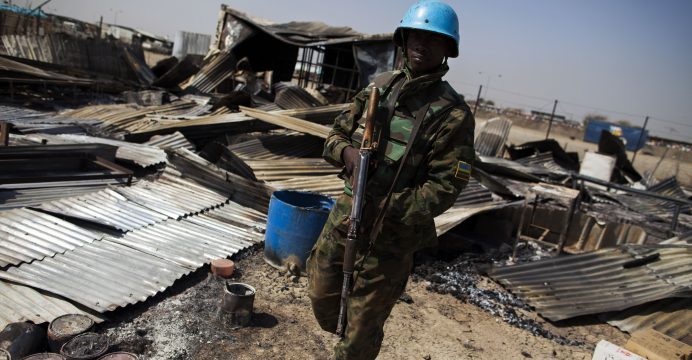 The international medical humanitarian organization Doctors Without Borders/Médecins Sans Frontières (MSF) released a report last month on the failures of peacekeeping and humanitarian assistance during a deadly attack on civilians taking shelter at a United Nations base in Malakal, South Sudan, in February, calling for the UN to address these shortcomings as civilians continue to need its protection in many areas of the country.

Violence erupted between internally displaced persons (IDPs) of different ethnic groups in the Protection of Civilians (PoC) site in Malakal on February 17 and continued until the next afternoon. There are strong indications that external military forces were also involved in the fighting.

The violence and ensuing fire caused the destruction of large swaths of the camp and killed at least 25 people, according to UN sources, while community leaders report as many as 65 deaths. Two MSF staff members were among those killed. A total of 108 people were injured and over 29,000 camp residents were displaced once again.

The report finds that despite a strong military presence at the PoC site, as well as a clear mandate to protect civilians, the United Nations Mission in South Sudan (UNMISS) failed in its duty to safeguard the people at the site and could have averted many fatalities.

“Our investigation shows that UNMISS did not fulfill its mandate to protect civilians as set by the Security Council,” said Raquel Ayora, MSF director of operations. “Prior to the attack, they failed to prevent the flow of weapons entering the camp; they chose not to intervene when initial fighting broke out in the camp, and when an attack came from outside the camp they were extremely slow to repel the assault.”

UNMISS actively blocked the IDPs from reaching safety during a large part of the emergency, the report also found.

Due to the volatile context in South Sudan and frequent attacks on civilians, people will most likely continue to seek refuge in PoC sites for the coming months and years, especially in the Greater Upper Nile region. It is therefore worrying that the living conditions of those residing in the Malakal PoC are still appalling four months after the February attack, MSF said.

Currently, the living space available per person is only a third of the internationally accepted minimum standards, food distribution is barely at subsistence level and the overall provision of water is often less than 15 liters per person per day (the minimum international Sphere standard). At the same time, sexual violence is rampant in and around the site.

It is evident that the underlying objective of UNMISS is to close Malakal and relocate the displaced population away from the site, MSF said. UNMISS is reluctant to improve the appalling living conditions in the site or to implement measures that would improve safety within the site.

A survey by MSF published alongside the report shows that over 80 percent of the displaced people feel unsafe inside the PoC site and have lost their trust in UNMISS after the February attack. However, the survey also shows that insecurity outside the camp was unanimously mentioned by all respondents as the main reason for not leaving the site.

“PoC sites continue to be the only partially effective solution for the dire protection needs of the population,” Ayora said. “Until there is a better or safer alternative, they cannot be dismantled and the protection and assistance gaps identified must be addressed. UNMISS and all humanitarian agencies should learn the lessons from this collective failure and take concrete steps to ensure that radically different decisions and actions would be taken in the event of a new attack or violence in the PoC site.”

MSF calls on the UN to publish the findings of its investigations into the events surrounding the attack on Malakal. Aid organizations should adapt and revise their contingency plans in the Malakal PoC and apply the lessons learned from this incident to other crises that have acute protection and assistance needs, MSF said