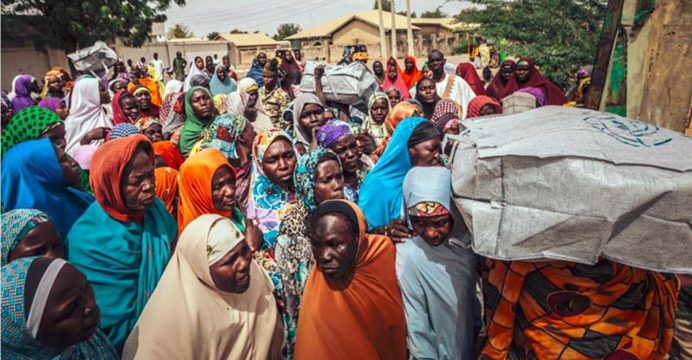 The Lake Chad Basin crisis began in 2014 with the Boko Haram insurgency and ensuing military operations in the region. Thousands have lost their lives and millions have been displaced across Nigeria, Niger, Cameroon and Chad.

According to the Displacement Tracking Matrix (DTM) led by the government of Nigeria with the support of IOM, over 2 million people have been internally displaced in Nigeria alone. The Emergency Relief Coordinator has described it as among the most underfunded and least addressed humanitarian crises worldwide.

The crisis in the Central African Republic, triggered by communal violence which led to mass forced displacement, began in 2013. Despite a general improvement of the security situation, conditions in displacement sites remain dire, access to basic services limited and high risk communities continue to experience periodic violent clashes. Over 400,000 people remain displaced.

CAR nationals have also been returning from neighbouring Chad since May 2015, creating a growing need for community stabilisation and revitalization initiatives. To date, IOM has assisted over 600,000 people in CAR and aims to reach some 400,000 more through the next year.

IOM’s priorities for the Lake Chad Basin include the provision of life-saving assistance through emergency shelter and distribution of non-food relief items (NFIs), as well as Camp Coordination and Camp Management (CCCM) activities.

It aims to target over 300,000 especially vulnerable people, including sexual and gender-based violence (SGBV) survivors, child-headed households, female-headed households, the elderly, those with disabilities, and those who have suffered psychological traumas.

To date IOM’s USD 61 million appeal for the Lake Chad Basin has received USD 12.6 million from OFDA (US), ECHO (EU), UN CERF, UN WFP and the governments of Japan, Germany and France.

Its appeal for USD 42.5 million for CAR has received USD 19.3 million from the EU, the UN Peacebuilding Support Office, and the governments of Japan and Germany.