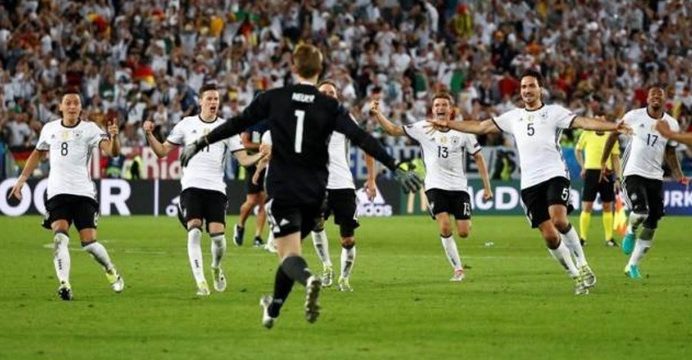 Germany won an epic shootout featuring 18 penalties by 6-5 to end their jinx against Italy in major tournaments and reach the Euro 2016 semi-finals after the game finished 1-1 following extra time on Saturday, reports Reuters.

Jonas Hector was Germany’s hero when he fired home the winning penalty, after Matteo Darmian missed for Italy, and they will now face either hosts France or Iceland in the last four.

The shootout featured seven misses with some near-farcical spot kicks and was a complete contrast to the tense, tactical and highly-disciplined 120 minutes of football that preceded it.

The usually clinical Germans, who had not missed in a shootout since the 1982 World Cup, failed to convert three times but still progressed thanks to even more wayward shooting by Italy who sent two kicks wide and had two saved by Manuel Neuer.

Germany, who in their semi-final on Thursday, have now won their last six shootouts at major tournaments since losing to Czechoslovakia in the 1976 European Championship final.

“It’s difficult to find the words. I’m overjoyed that the ball went in,” said Hector. “I can’t describe the feeling. I took my heart in my hands and just wanted to knock it in.”

Germany coach Joachim Loew added: “I congratulated him (Hector). It was a very special situation. I had a good feeling when he was taking his (penalty) shot.”

Mesut Ozil had given Germany the lead midway through the second half before Leonardo Bonucci replied with a penalty following a bizarre handball by Jerome Boateng.

Germany, who reached their sixth successive semi-final in a major tournament, had never previously beaten Italy at a major finals — a run stretching back to the 1962 World Cup.

Italy’s four wins included a World Cup final and two semis and the Euro 2012 semi-final. The other four games were drawn.

For Italy, the defeat was the end of the road in a campaign which has already taken them further than expected, with impressive wins over dark horses Belgium and holders Spain.

Coach Antonio Conte has been credited with overcoming the lack of natural talent in his squad through tactical discipline and hard work but, with key midfielder Daniele De Rossi joining the injured list, Germany proved to be a bridge too far.

“The players have left a significant mark on this tournament and shown that with desire and hard work, you can achieve something,” said Conte.

“Football can bring you joy and can leave a bad taste in your mouth. The players will always have a place in my heart.”

The first half was as tense, tactical and cagey as expected between teams who had conceded one goal between at these finals.

Germany’s passing was slicker, though, and they went ahead the 65th minute when Hector’s pass into the area was deflected off Bonucci and fell perfectly for Ozil to guide into the net.

It seemed that might be enough to win the game but Italy equalised out of the blue 13 minutes later.

Alessandro Florenzi curled the ball into the area, Boateng jumped to challenge Giorgio Chiellini with his arms raised like a basketball player and the ball hit the German’s arm.

Italy suddenly found a new lease of life as striker Graziano Pelle had a shot deflected wide following a quick break and Mattia De Sciglio fired into the side-netting.

Little happened in extra time but the shootout was one of the most eventful ever seen at a major tournament.

Simone Zaza, who sent his kick high and wide after an unorthodox run-up, Pelle, Bonucci and Darmian missed for Italy, while Thomas Mueller, Ozil and Bastian Schweinsteiger fluffed their lines for Germany before Hector sealed the victory.