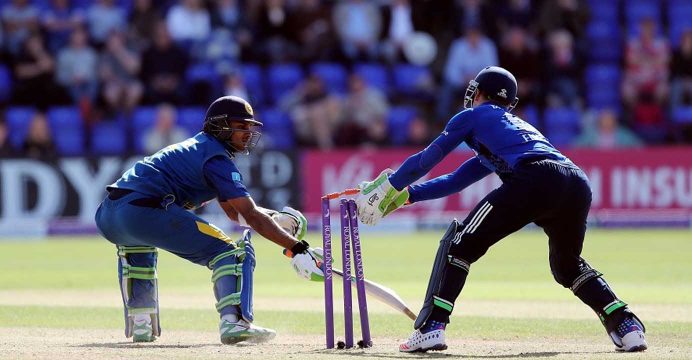 England has overtaken Sri Lanka to reach fifth position in the latest MRF Tyres ICC ODI Team Rankings after completing a 3-0 win in their five-match series that ended on Saturday.

England, which had started the series two points behind Sri Lanka’s 105, won the second, fourth and fifth matches with big margins after the opening match ended in a tie and the third was a no-result due to rain. England gained three points to reach 106 while Sri Lanka lost three points to tally 102.

World champion Australia is at the top of the table with 123 points, New Zealand second at 113 while India and South Africa are both at 110 with India ahead on decimal points.

Some dominating individual performances from England saw its players rise up the MRF Tyres ICC Players Rankings for ODI batsmen with Jason Roy reaching a career-best 48th after two centuries in the series, and Joe Root and Jos Buttler also winding their way up in a list headed by South African AB de Villiers.

Roy, who smashed an unbeaten 112 in a 10-wicket win in the second match at Birmigham and an astounding 118-ball 162 in a six-wicket win in the fourth match at The Oval to end up as the highest run-getter in the series with 316 runs, jumped 30 places.

For Sri Lanka, captain Angelo Mathews scored 253 runs in the series to be on joint-18th position while Dinesh Chandimal gained seven slots to reach 52nd after aggregating 267 runs, the highest for Sri Lanka and second overall behind Roy.