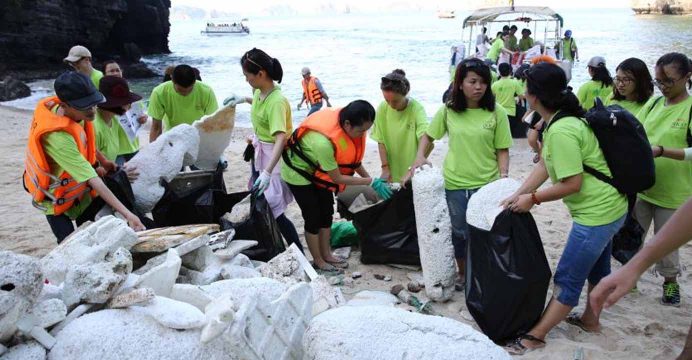 As part of the USAID-funded Ha Long-Cat Ba Alliance (HLCBA), a clean-up day was organized by IUCN and Au Co Cruises on 14th of June in Ha Long Bay with over 100 volunteers from across Vietnam.

Participants came from different backgrounds, including businesses, NGOs, and media. But young people and especially students made up most of the volunteers. Despite their differences, all arrived with a common desire to help preserve the beauty and natural integrity of Ha Long Bay, a World Heritage Site that faces serious environmental challenges.

The clean-up initiative was not only designed as an environmental awarenes campaign, but also intended to mobilise local authorities and other cruise boat companies in the Bay to implement regular clean-up activities. 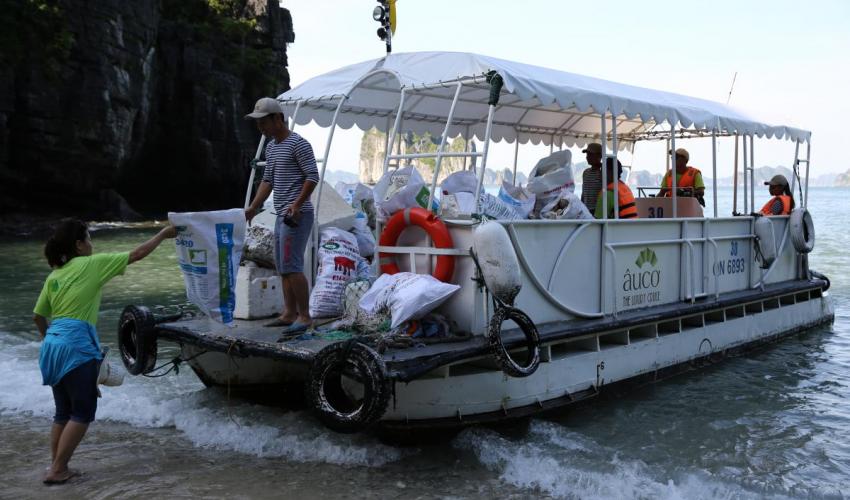 In his welcoming remarks, Ho Quang Huy, Vice Chairman of the Ha Long City People’s Committee, spoke of the province’s commitment to protect the bay by investing in conservation and restoration activities. He also highlighted the role that IUCN play as a vital bridge between the private sector and local authorities, in efforts to achieve objectives in the Environmental Plan of Quang Ninh Province by 2020 with a Vision to 2030; targets that aim to improve the efficiency of local authorities in the field of environmental management.

Darius Postma, Corporate Social Responsiblity (CSR) Foundation Director and co-organiser of the clean-up, emphasized the importance of involving all stakeholders and making the event a more regular activity. He also stressed the important role that young people will play in raising public awareness about the need for better environmental protection in Vietnam.

Following Huy’s remarks, participants were briefed on how to collect, classify, and report on trash. Some groups were assigned to use kayaks to collect floating trash while others were responsible for collecting refuse on three beaches in Vung Ha. 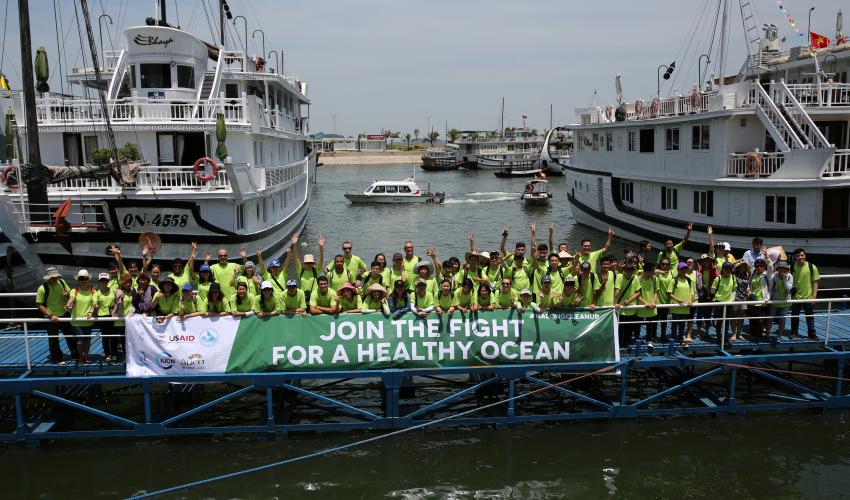 After the clean-up, participants returned to the boat to compare results. In most cases, polystyrene from floating villages represented by far the largest component of the trash collected. From the shape and size of the polystyrene, it was probably used to float houses that were relocated out of the bay two years ago and/or from hundreds of floating houses in nearby Cat Ba.

Certificates were issued to all the volunteers by Au Co Cruises and IUCN for their effort in contributing to a cleaner, safer and more beautiful Ha Long Bay. Another call for volunteers will soon be released by IUCN, for a second clean-up day in September, as IUCN and partners continue with efforts to protect the unique World Heritage Site.