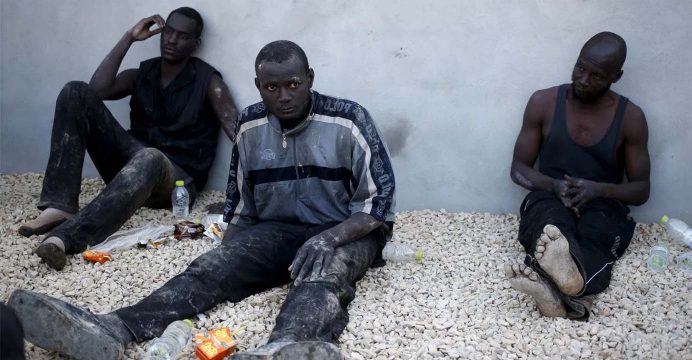 Horrifying accounts of sexual violence, killings, torture and religious persecution collected by Amnesty International reveal the shocking range of abuses along the smuggling routes to and through Libya.

Amnesty International spoke to at least 90 refugees and migrants at reception centres in Puglia and Sicily, who had made the journey across the Mediterranean from Libya to southern Italy in the past few months, and who were abused by people smugglers, traffickers, organized criminal gangs and armed groups.

“From being abducted, incarcerated underground for months and sexually abused by members of armed groups, to being beaten, exploited or shot at by people smugglers, traffickers or criminal gangs – refugees and migrants have described in harrowing detail the horrors they were forced to endure in Libya,” said Magdalena Mughrabi, Interim Deputy Director of the Middle East and North Africa Programme at Amnesty International.

“Their experiences paint a terrifying picture of the conditions many of those who come to Europe are so desperate to escape.”

Hundreds of thousands of refugees and migrants – mostly from Sub-Saharan Africa – travel to Libya fleeing war, persecution or extreme poverty, often in the hope of settling in Europe. The International Organization for Migration (IOM) estimates there are over 264,000 migrants and refugees currently in Libya. According to UNHCR, there are around 37,500 registered refugees and asylum-seekers, half of them Syrians.

“No one should have to face abduction, torture and rape in Libya to seek protection. The international community should be doing their utmost to ensure refugees do not need to flee to Libya in the first place. The EU, and indeed governments around the world, should dramatically increase the number of resettlement places and humanitarian visas to vulnerable refugees facing severe hardships and few prospects in the neighbouring countries they first fled to,” said Magdalena Mughrabi.

Despite the formation of a UN-backed Government of National Accord fighting continues in parts of Libya including in Benghazi, Derna and Sirte. “The Libyan authorities must take urgent steps to restore the rule of law and protect the rights of refugees and migrants. The internationally-backed Government of National Accord has made commitments to respect and uphold human rights – they have a duty to hold those responsible for these abhorrent crimes accountable.” Amidst the lawlessness and violence that continue to plague the country, a lucrative people-smuggling business has been established along routes running from southern Libya to the Mediterranean coast in the north where boats bound for Europe depart. At least 20 of the people Amnesty International spoke to also described abuses suffered at the hands of the Libyan coastguard and in immigration detention centres inside Libya.

Amnesty International spoke to refugees and migrants who described facing abuse at every stage of the journey, from their arrival in Libya until they reached the northern sea coast. Others had lived in Libya for years but wanted to escape because of harassment or abuse by local gangs, police or armed groups. Amnesty International documented abuses by smugglers, traffickers and armed groups in Libya in its 2015 report Libya is full of Cruelty. The latest testimonies show that one year on, refugees and migrants continue to be subjected to horrifying abuse.