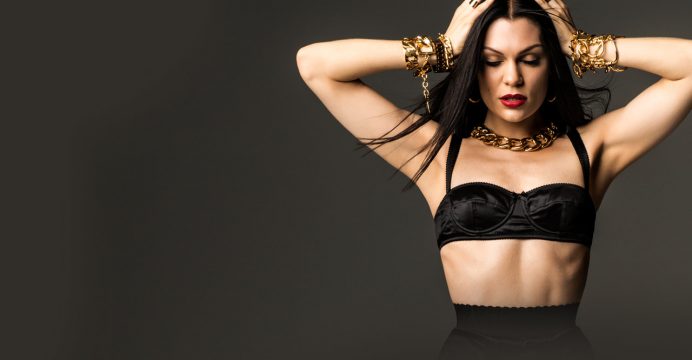 Australia might be experiencing some of the coldest weather for 20 years but singer Jessie J raised the temperature up at Sydney Airport with a summer party-themed gig aboard a British Airways aircraft.

The 28-year-old judge of TV’s The Voice brought a taste of balmy Britain to Australia to celebrate the arrival of summer back home with a special show for celebrity special guests, VIP customers and 10 competition winners. British Airways has been flying to Australia for over 80 years and currently operates a daily service between Sydney and London Heathrow via Singapore – with return fares starting from $1,477 but for  the aircraft stayed firmly on the ground while Jessie’s voice soared.

Lucky fans watched her perform three of her biggest hits including Bang Bang, Pricetag and Domino – plus a cover of the late singer Prince’s 1984 hit Purple Rain – inside a cabin decorated like a traditional summer street party, complete with bunting and bright balloons. And at the same performance British Airways announced their latest set of summer flight packages to more than 100 European destinations. Speaking after the gig, London-born singer Jessie said: “It might be freezing here but summer has arrived back home in Britain, and when the sun’s out there’s no better time to visit London. Gardens and parks are in full bloom and everybody’s in a fantastic mood – there’s a real unique buzz about the place.”

Discussing her performance on-board, Jessie added: “This is the first time I’ve ever sung on-board an aeroplane and it was brilliant. The audience really got into it and the cabin actually had terrific acoustics.

He said: “I wanted to surprise them with each mouthful. Being British I’m very proud of my heritage and like to showcase this in my food with 21st century tweaks and techniques.” Tim Philip’s tasty gin and sherry-based Antipodes cocktail is a mix of Tanqueray No. 10, Tio Pepe sherry with citrus flavours and chamomile, combining 1930’s British influence with Australian ingredients. Philips added: “It’s been an honour to have my winning cocktail served on-board British Airways flights and hopefully today it tasted just as good on the ground for Jessie and our guests.”