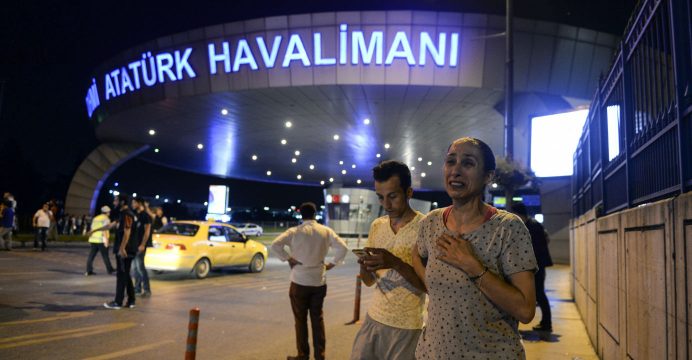 Turkey to accuse IS for Istanbul airport carnage

Witnesses described scenes of terror and panic on Tuesday evening as the attackers began shooting indiscriminately and then blew themselves up at the entrance to Ataturk airport, one of Europe’s busiest hubs.

The assault, which comes at the start of Turkey’s crucial tourist season, was the latest in a wave of attacks in Istanbul and the capital Ankara blamed either on Islamic State (IS) jihadists or Kurdish rebels. 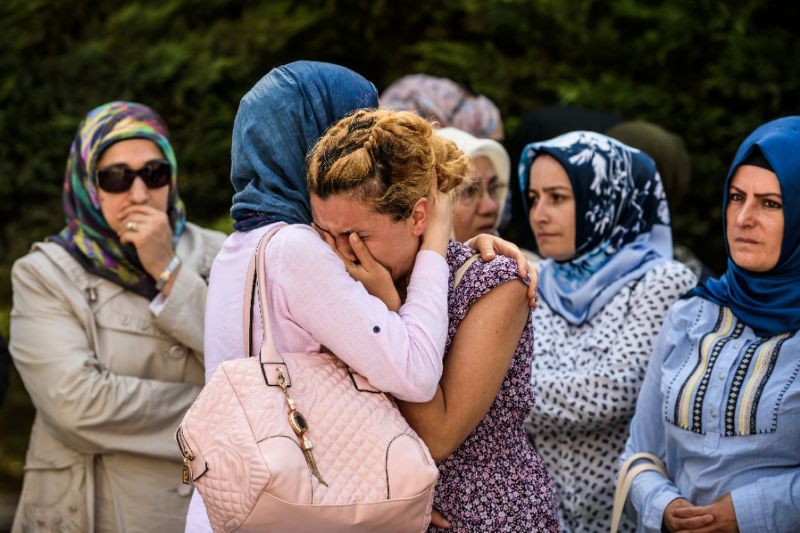 There was no immediate claim of responsibility but Prime Minister Binali Yildirim said “the evidence points to Daesh”, using another name for IS.

The city’s governor said 41 people were killed, including 13 foreigners, and 239 wounded. The dead include several Saudis, a Chinese national, a Tunisian and a Ukrainian.

The carnage sparked global condemnation, with US President Barack Obama speaking by phone with hit counterpart Recep Tayyip Erdogan to express his condolences, according to Turkish presidential sources.

Erdogan declared Wednesday a national day of mourning after urging an international “joint fight” against terror. Security camera footage widely circulated on social media appeared to capture two of the blasts. In one clip a huge ball of flame erupts at an entrance to the terminal building, scattering terrified passengers.

Another video shows a black-clad attacker running inside the building before collapsing to the ground — apparently felled by a police bullet — and blowing himself up.

The attack came just as Turkey, which had found itself increasingly friendless on the international stage, begins rebuilding relations with Israel and Russia.

It also follows coordinated IS suicide bombings at Brussels airport and a city metro station in March that left 32 people dead.

LET ME SEE MY CHILD

Women sobbed outside a local morgue, while families were desperately waiting for news of loved ones outside several Istanbul hospitals.

“Let me see him, I beg you,” a woman screamed outside one hospital. “No one’s told me what’s happened to my child. I raised him. They’re not telling me anything.”

The airport itself was back up and running by early Wednesday, with workers clearing up the shattered glass and nervous passengers filing in as flights resumed.

“You hope obviously that something like that, it won’t happen two days in a row again, that there is a lot of security — but obviously it affects you.”

Otfah Mohamed Abdullah was checking in her luggage when she saw one of the attackers pull out a hidden gun.

South African university administrator Judy Favish said she had hidden under a counter as the attackers opened fire. She and other travellers were ushered to the basement before emerging about two hours later.

“We walked through the airport and saw debris and blood. It was just chaos,” she told South African TV network eNCA.

Tourism, a key source of income in Turkey, has been badly hit by a spate of deadly recent bombings. The government will be hoping to recoup some of the losses after Russia on Wednesday lifted punishing sanctions imposed over a diplomatic spat, including a ban on package holidays.

But Ege Seckin, an analyst at IHS Country risk, said the attack was “most likely conducted by the Islamic State to undermine the Turkish economy by attacking the airport ahead of the summer months, when tourism peaks”.

A bombing in the heart of Istanbul’s tourist district in January, blamed on IS, killed a dozen German visitors. Two months later, three Israelis and an Iranian were killed in another bomb attack blamed on IS that hit the city’s main Istiklal shopping street.

Turkey has been hit by at least five attacks blamed on IS jihadists, including a blast in Ankara in October 2015 that left over 100 dead, the worst in the country’s modern history.

The Kurdistan Freedom Falcons (TAK) — seen as a splinter group of the rebel Kurdistan Workers’ Party (PKK) — also claimed a car bombing in Istanbul in June that killed 11, and warned foreign tourists they were not safe.

The group said it was avenging Ankara’s sustained offensive against the outlawed PKK in southeastern Turkey following the collapse of a ceasefire last year. Hundreds of members of the Turkish security forces have since been killed in PKK attacks.

Leaving the airport on Wednesday, Iranian fabric trader Huseyn Kokmus told AFP he was no longer happy coming to Turkey for work under the threat of attacks.

“But I swear I don’t think I will be coming back this time.”