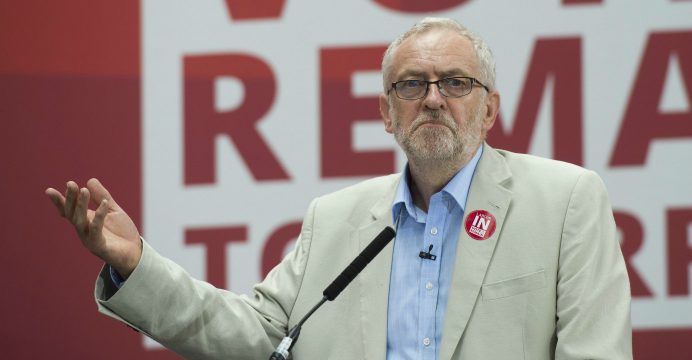 British opposition Labour lawmakers voted massively against their leader Jeremy Corbyn in a no-confidence motion Tuesday triggered by the Brexit crisis, but the veteran socialist refused to quit, reports BSS.

Corbyn, who has the crucial backing of labour unions and was elected last year in a landslide by ordinary Labour party members, was defeated by 172 to 40 in the non-binding vote of Labour lawmakers. But the 67-year-old self-declared pacifist insisted he would not stand down.

“I was democratically elected leader of our party for a new kind of politics by 60 percent of Labour members and supporters, and I will not betray them by resigning,” he said in a statement.

“Today’s vote by MPs has no constitutional legitimacy,” he added.

In the sign of the depth of the crisis, the Scottish National Party, which has 54 seats in the House of Commons to Labour’s 229, announced it would make a bid to take over as the official opposition party in parliament.

He added that there was “more support” for the SNP’s government-in-waiting than the one cobbled together by Corbyn, after over half of his top team resigned in protest at his leadership since the weekend.

Corbyn immediately came under pressure to quit after Britain’s shock referendum vote, with critics accusing him of failing to rally the Labour’s core vote base for the “Remain” camp.

The Leave campaign’s 52 percent victory has thrown both Labour and Prime Minister David Cameron’s Conservatives into disarray, the two parties that have dominated Westminster for nearly a century.

A seemingly endless string of his front bench team then quit in coordinated fashion, each releasing withering resignation letters. If Corbyn continues to defy calls to resign, the next obvious step is for him to face a leadership challenge.

Media reports Tuesday suggested that his former business spokeswoman Angela Eagle could be preparing to launch a bid to succeed Corbyn.

The Labour turmoil comes amid speculation that, whoever succeeds Cameron as Conservative leader and prime minister, may be tempted to call an early election later this year.

Labour, which has lurched to the left under Corbyn’s leadership, is viewed as unelectable in a general election while he remains in charge.

Former Foreign Secretary Jack Straw said his party faced an “apocalypse” if an election was held and Corbyn was still in office.

“Mr Corbyn’s position is wholly untenable. This I’m afraid is a very old Trotskyist fantasy, that somehow or other he’ll be able to bypass parliament.”

The leadership ructions of both parties were in full swing on the front pages of Wednesday’s newspapers, with the the Metro calling on Corbyn to “Please Jez go!” and The Sun declaring it “Boris day”.

Boris Johnson, the former mayor of London and “Leave” figurehead is tipped as a frontrunner for the next Conversative leader along with Home Secretary Theresa May.

British media reported that Work and Pensions Minister Stephen Crabb, a virtual unknown to the British public, will also put his name forward.

Nominations open Wednesday to succeed Cameron. They will close at noon Thursday, and the new leader is expected to be announced on September 9. Pro-EU finance minister George Osborne, long seen as a possible Cameron successor, has ruled himself out.

A new poll Tuesday put May in the lead with 31 percent, against 24 percent for Johnson. If more than two candidates stand, Tory MPs will vote next week to whittle down the field to two nominees, before the new leader is chosen by a postal ballot of party members, who currently number around 150,000.

Critics have questioned whether the “Leave” camp — and Johnson in particular — has any idea how to manage the unprecedented situation left by last week’s vote.

“He has still to offer anything like a concrete plan on how he would negotiate the post-Brexit future,” wrote former BBC political editor Nick Robinson.

He added: “The fallout from the biggest exercise in popular democracy has already been dramatic… It has, though, only just begun.