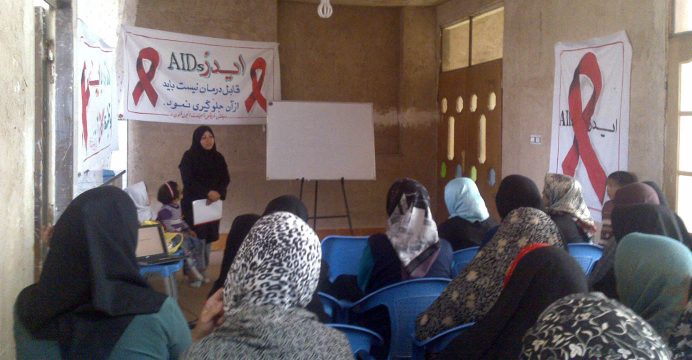 The United Nations Development Programme (UNDP) and the Global Fund signed a US$8.7 million grant to scale up HIV prevention measures and treatment for people most at risk of contracting the virus in Afghanistan, including injecting drugs users and prisoners.

Though HIV infection rates across the general population in Afghanistan are low, the epidemic continues to spread among key populations at higher risk of HIV. For example, injecting drug use is a major driver of HIV infections in Afghanistan, a country that is also the world’s leading producer of opium and heroin.

A combination of injecting practices involving the use of non-sterile equipment, high-risk sexual behaviour, punitive policies and stigma towards people who inject drugs are fuelling the epidemic. The most recently available drug use survey showed that eight per cent of the population aged 15-64 is dependent on drugs, with significant increases in the number of people who use opium and heroin.

“Without reducing stigma associated with drug use, and implementing prevention programmes that treat every person with dignity, compassion, and respect, regardless of circumstance or condition, Afghanistan’s efforts to curb the HIV epidemic will fall short. We need to go the extra mile and this new grant will help us do it,” said Jocelyn Mason, UNDP Senior Deputy Country Director in Afghanistan.

In addition, different sources suggest that men with high-risk sexual behaviour may play a larger role in HIV transmission than previously thought. They also experience stigma and discrimination in their own families and communities, and are confronted with punitive laws, prosecution and a lack of access to HIV prevention services.

The new Global Fund grant will be implemented in partnership with the Ministry of Public Health and the National Aids Control Program, the Ministry of Interior Affairs, provincial health offices, and non-governmental organizations. It will provide treatment and care for people living with HIV, expand existing prevention services for the general population and focus on groups at higher risk. The grant will run until the end of 2017, and will aim to keep HIV prevalence below 0.1 per cent among the general population, and below five per cent among key populations at high risk.

“Through this grant, the Government of Afghanistan will be able to build on previous achievements, expand and improve treatment and care for people living with HIV, accelerate prevention efforts and effectively reach vulnerable populations that are key to controlling and reversing the HIV epidemic. This is an important contribution to the fight against HIV in Afghanistan,” says Dr. Najibullah Safi, Director General of Preventive Medicines of Ministry of Public of Government of Islamic Republic of Afghanistan.

Comprehensive harm reduction services for people who inject drugs will be provided under the grant, including in prison settings where needle and syringe exchange programmes are currently not allowed. The grant will increase availability and coverage of opioid substitution therapy (OST) through services in drop-in centres in communities and prisons. OST, which replaces illegal opiates with prescribed medicines, is an effective method to decrease HIV transmission by reducing risks associated to injection of drugs, and to foster adherence to HIV treatment among people who use drugs, while also improving their quality of life.

To address high levels of stigma and discrimination related to HIV and drug use, the grant will strengthen legal and policy environments in order to promote access to HIV prevention, treatment and support for people vulnerable to and affected by HIV, securing their meaningful involvement in the response to HIV in Afghanistan.

The grant will be key to achieving the national strategic plan for control of HIV and AIDS as well as the UNAIDS 90-90-90 target. It will also contribute to achieving the Sustainable Development Goals adopted in September 2015 by world leaders and in particular Goal 3 on Good Health and Well-being.