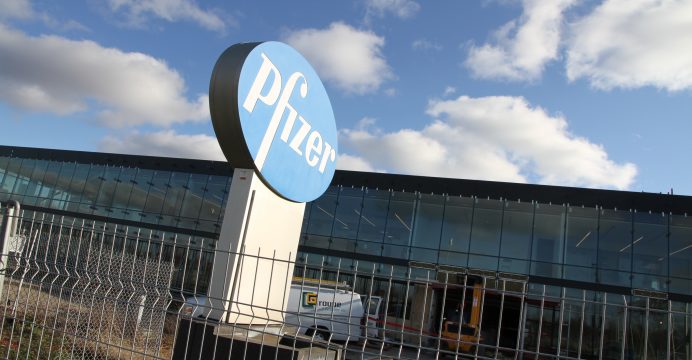 Pfizer Inc. (NYSE:PFE)  announced results from a Phase 1b trial of Pfizer’s investigational immunotherapy agent utomilumab (the proposed non-proprietary name for PF-05082566), a 4-1BB (also called CD137) agonist, in combination with pembrolizumab, a PD-1 inhibitor, in patients with advanced solid tumors. This is the first reported study of a 4-1BB agonist combined with a checkpoint inhibitor. Encouraging safety data from the study were shared today as an oral presentation at the 52nd Annual Meeting of the American Society of Clinical Oncology (ASCO) in Chicago.

“While these are early data, the combination of utomilumab with pembrolizumab demonstrates an encouraging safety profile and an early indication of potential anti-tumor activity across solid tumors,” said Anthony W. Tolcher, M.D., director of clinical research at South Texas Accelerated Research Therapeutics (START) San Antonio. “We believe these results warrant further investigation to confirm whether combining utomilumab with a checkpoint inhibitor may amplify anti-tumor responses.”

Of the 23 patients enrolled in the trial, six had a confirmed complete or partial response. The majority (four of six) of these responses lasted at least six months, with two patients maintaining their response for nearly one year at the time of data cut off. Treatment emergent adverse events were generally mild and did not appear to increase with higher doses of utomilumab, and no dose-limiting toxicity was reported.

“Pfizer believes that bringing the promise of immunotherapies for cancer to more patients will occur through combining agents that work on different pathways within the immune system,” said Chris Boshoff, vice president and head of Early Development, Translational and Immuno-Oncology for Pfizer Oncology. “We are exploring numerous utomilumab combinations in order to better understand its potential role in mobilizing the immune system against difficult-to-treat cancers.”

Pfizer is investigating utomilumab in both hematologic cancers and solid tumors in several planned and ongoing trials. It is being evaluated as a single agent across multiple tumors, in combination with rituximab in lymphoma, and in combination with other immunotherapies (e.g., OX40 agonist [PF-04518600], anti-CCR4 [mogamulizumab] and avelumab, an investigational fully human anti-PD-L1 IgG1 monoclonal antibody being developed through an alliance between Merck KGaA, Darmstadt, Germany, and Pfizer) in various solid tumors and hematological malignancies. The mogamulizumab/utomilumab combination is a collaboration with Kyowa Hakko Kirin, Japan