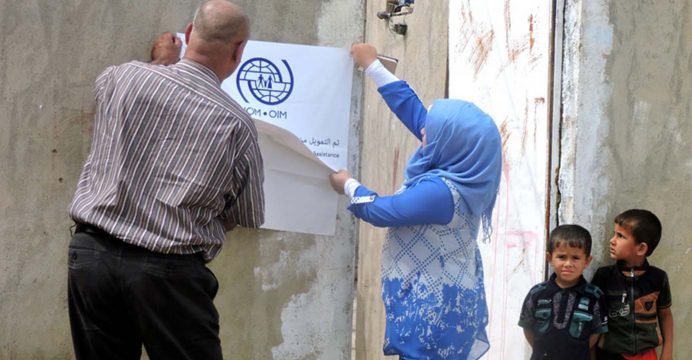 The IOM Displacement Tracking Matrix (DTM) has identified and confirmed the location of 3,317,394 displaced Iraqis across the country from 1 January 2014 to 8 June 2016.

While new displacements are going on, many Iraqis have started to return to their places of origin in liberated areas. IOM identified 743,910 returnees in Iraq from return movements that began in August 2014.

IOM Iraq’s recent DTM Returnee Location Assessment was conducted by IOM field teams across the country from March to May 2016. A total of 296 locations – corresponding to more than 540,000 individuals—were assessed in the central and northern governorates of Ninewa (100 locations), Salah al-Din (95 locations), Diyala (92 locations), Anbar (6 locations), Erbil (6 locations) and Kirkuk (3 locations.)

The assessment provides insight into the needs, profile and experience of the returnee population and includes key information on reasons for return, returnees’ priority needs, residence and infrastructure level of damage, sex and age disaggregated data, and returnees’ intentions. Data was collected at a location level through interviews with key informants, including community leaders, local authorities and security forces.

Reported first priority needs of returnees included: drinking water (30 per cent), food (19 per cent), health care (17 per cent), access to income (11 per cent), shelter or housing (8 per cent), and security (7 per cent). In the governorates of Salah al Din, Ninewa, Diyala and Anbar, extensive damage was reported to infrastructure systems including water, electricity, roads, bridges and schools.

Since 2015 IOM has provided 420 tents to assist returnees whose homes were completely destroyed in the governorates of Salah al-Din, Diyala and Kirkuk. Through the support of the USAID Office of Foreign Disaster Assistance (OFDA), IOM has rehabilitated essential rooms in 400 damaged houses for families who returned to Salah al-Din and Diyala.

Returnee Abo Ahmed said: “My family, and my neighbours and I escaped our neighbourhood in Al-Alam when ISIL invaded Salah al-Din. We went to Kirkuk, where my mother, my wife, our three children and I lived in a single room; we never had any privacy. We had difficulty finding a source of income. After we heard that our area in Salah al-Din had been liberated, we returned home in April 2015. Our house had been damaged and burned; we couldn’t afford to fix it so we had to rent. We were about to lose hope, when IOM came and built a new room for us, freeing us from paying rent.”

IOM Iraq Chief of Mission Thomas Lothar Weiss said: “Hundreds of thousands of displaced Iraqis have taken the step to return to their location of origin. Despite damage to their homes and potential insecurity, returnees are determined to rebuild their homes and communities. IOM Iraq, in cooperation with the UN Humanitarian Country Team, humanitarian partners, government authorities and donors, looks forward to continuing to support these Iraqis, as they undertake the difficult process of resuming their lives.”

In an effort to assist and prepare for further returns, IOM is chairing the Returns Working Group, established under the UN Humanitarian Country Team, to develop recommendations for Iraqi governorates affected by returns, and provide technical advice to partners, government and civil society to support the implementation of returns according to international standards.

The IOM Iraq DTM Returnee Location Assessment, including data display, dashboard summarizing the main findings and the questionnaire used for data collection are available on the DTM portal iraqdtm.iom.int. The Iraq DTM is mainly funded by the US State Department’s Bureau of Population, Refugees, and Migration (PRM.)