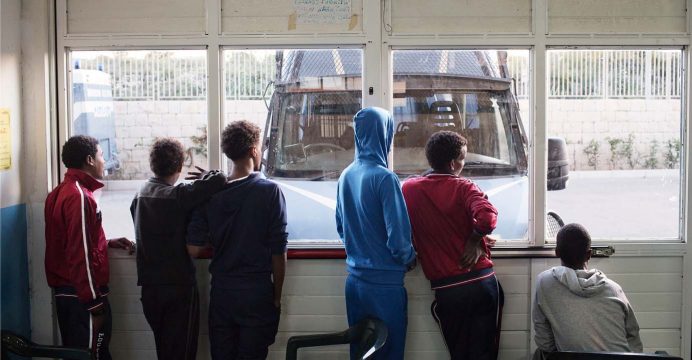 A group of 39 Ethiopian children aged between 16 and19 have been released from detention in Zambia following a presidential pardon and returned home to Ethiopia with IOM.

The children, who were serving 15-year sentences for consenting to being smuggled, were pardoned on 25th May to mark Africa Freedom Day. IOM facilitated their transfer from prison to a shelter and organized their voluntary return home on Friday 24th June 2016.

“We didn’t know that we would ever get out of prison alive; to be here today and to be returning home to our family is such a huge relief, I’m so grateful to God,” said Yohannes Abebe.* (*Name changed.)

Imprisonment of smuggled children — which contravenes international law — comes under Zambia’s Anti-Human Trafficking Act # 11 of 2008. That regulation does not distinguish between penalties for smugglers and persons consenting to being smuggled. It prescribes a mandatory minimum sentence of 15 years imprisonment for both categories.

“The President’s decision to pardon the children and release them demonstrates the government’s commitment to uphold the rights of vulnerable migrants,” said IOM Zambia Chief of Mission Abibatou Wane.

“In partnership with other stakeholders, IOM has been advocating for alternatives to detention for vulnerable migrants who are detained for immigration offences, in particular children and individuals with health concerns,” she added.

IOM, UNICEF and UNHCR are also supporting the government in reviewing Zambia’s Anti-Human Trafficking Act and Immigration and Deportation Act to ensure that they are in line with international legal principles.

Currently, there are still over 400 stranded migrants in Zambian prisons, including more unaccompanied and separated children.

The return of the children to Ethiopia was funded by the US State Department’s Bureau of Population and Refugees (PRM) and the Office to Monitor and Combat Trafficking in Persons (J/TIP) Emergency Fund, together with the IOM Global Assistance Fund (GAF.)