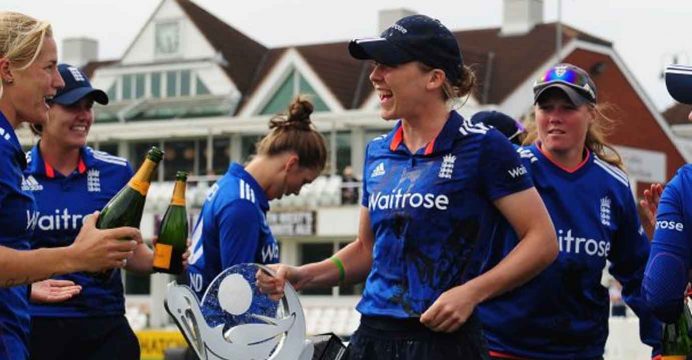 England jumps to third in the ICC Women’s Championship

Former world champion England has vaulted three places to third in the ICC Women’s Championship, after the conclusion of round five of seven following its convincing 3-0 series win over Pakistan in Taunton on Monday.

England’s women won by seven wickets (in Leicester), 212 runs (in Worcester) and 202 runs (in Taunton) in what was a high-scoring series with the home side scoring 360 runs or more in the final two matches of the series and two England batters Tammy Beaumont and Lauren Winfield sharing three centuries between them.

The newly appointed England captain was thrilled with the effort, but reminded her side of the long journey ahead. “We have only played three matches (in this season), and we aren’t looking too far ahead. It’s been a brilliant effort so far, but now comes the test of maintain this level of performance as we build towards a home ICC Women’s World Cup next summer.”

Coach Mark Robinson was happy for the move up the championship table. “Every international game of cricket is important, but it was clearly very important that we secured maximum points from these three ICC Women’s Championship matches against Pakistan, to put ourselves back into the mix at the top of the table.”

World champion and number-one ranked Australia leads the pack with 24 points with two rounds remaining, while the recently crowned ICC Women’s World Twenty20 champion West Indies is close behind on 20 points. After pipping Pakistan, England has climbed to 19 points and in doing so, has leap-frogged New Zealand (fourth), South Africa (fifth) and India (sixth). Pakistan has retained its seventh position, while Sri Lanka is in eighth spot.

Knight began her reign as England captain in Leicester in style when she became the first women’s captain to score 50 runs and take five wickets in the same match. She finished the series with 88 runs (three innings, two not-outs) and five wickets, for which she has been rewarded with jumps in all the three categories.

In the batting table, Knight has moved up three places to a career-best 13th position, in the bowlers chart she is now at a career-high 33rd spot (up by nine places), while in the all-rounders rankings, she has gained a position to rest in eighth place.

Beaumont was the star performer for England with the bat. The 25-year-old opener from Kent scored two centuries on her way to finishing as the leading run scorer with 342 runs, including 104 in Worcester and 168* in Taunton. As a result, she has returned to the batting table in a career-best 37th spot.

Lauren Winfield has achieved a career-high 55th place (up by 36 places) following her series contribution of 166 runs, while Natalie Sciver has claimed a career-best 26th spot (up by seven places) after finishing as the third highest scorer in the series with 155 runs.

Pakistan’s Bismah Maroof (107 runs) was her side’s top run-scorer and fourth overall in the series, which was enough for her to retain 14th position.

Meg Lanning of Australia is the number-one ranked batter, followed by New Zealand’s Suzie Bates and Mithali Raj of India.

Other movers were Laura Marsh 24th (up by four places), Sadia Yousuf 28th (up by one place) and Natalie Sciver 65th (up by eight places).

India’s Jhulan Goswami is the number-one ranked bowler and she leads Brunt by 72 points.

The ICC Women’s Championship will resume in September with all eight sides scheduled to feature in the final two rounds, which will culminate in November.