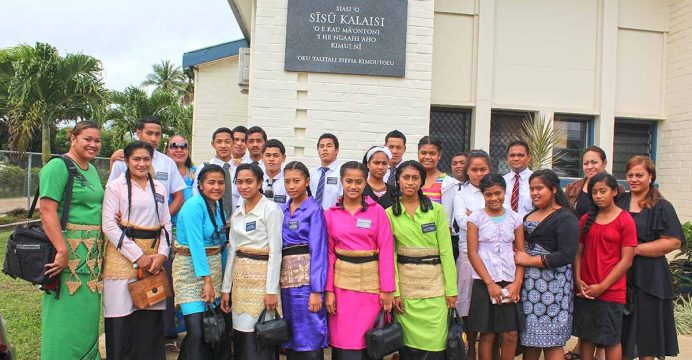 In Tonga, call for NCD action echoes across the Pacific

The peoples of the Pacific have the world’s highest rates of obesity and diabetes, exceeding 30% of the adult population in some islands states. This week, government, health and development authorities met in the first coordinated, high-level effort to do something about it.

The Pacific NCD Summit opened on 20 June with an address from the King of Tonga, His Majesty King Tupou VI. More than 120 high-level delegates representing Pacific island governments and development partners attended, including the President of Kiribati, H.E. Taneti Maamau and ministers of health from some 14 Pacific countries.
Presentations over the summit’s three intense days ranged from new WHO and World Bank reports on childhood obesity and the economic impact of NCDs to small country-level pilot projects on prevention and physical activity.
Helen Clark, the United Nations Development Programme (UNDP) Administrator and a native New Zealander with years of experience working with Pacific island governments, underscored the stakes in her keynote address on Monday:
“We find ourselves here with good reason – progress has been insufficient and uneven in combating NCDs, both globally and in the region. The Summit is an opportunity for the Pacific to strengthen its commitment to take a stronger, integrated and more urgent action,” she said.
As the Hon. Minister of Health of Fiji, Mr. Jone Usumate, noted later: “development without health is not development”.
Epicentre of an epidemic
On 22 June, delegates endorsed an outcomes document to be presented at the Pacific Ministers of Health meeting in Cook Islands next year. They agreed to circulate draft call to action documents for approval by Pacific island states governments, to adopt measureable indicators for progress, and to explore options to establish greater synergies between funding sources.
Delegates also agreed on the need to ensure that Pacific NCD responses are well aligned with global health and development agendas, including the SAMOA Pathway, the Healthy Islands Vision and the Pacific NCD Roadmap.
The Summit was jointly organised by the Government of Tonga and the Pacific Community, with support from the Australian Government, New Zealand Aid Programme, Government of the United States, World Bank, World Diabetes Foundation, World Health Organization and the United Nations Development Programme.
Dr Anders Dejgaard, Managing Director of the World Diabetes Foundation, attended the summit together with Board Member Ida Nicolaisen, Senior Programme Manager Bent Lautrup-Nielsen and Programme Manager Hanne Strandgaard.
“It is a privilege to be at the Pacific NCD Summit, a unique and needed event held at the epicentre of the global diabetes epidemic,” Dr Dejgaard said. “We at the WDF are committed to supporting the Pacific region through our partnerships, funding and expertise. Success stories on the fight against diabetes and other NCDs in the Pacific region will not only benefit thousands of people living here, but will act as a guiding light for others fighting NCDs worldwide.”
The WDF has funded partnership projects in Fiji, Tonga, Marshall Islands, Vanuatu, Kiribati, Micronesia, Papua New Guinea, Solomon Islands and Nauru.