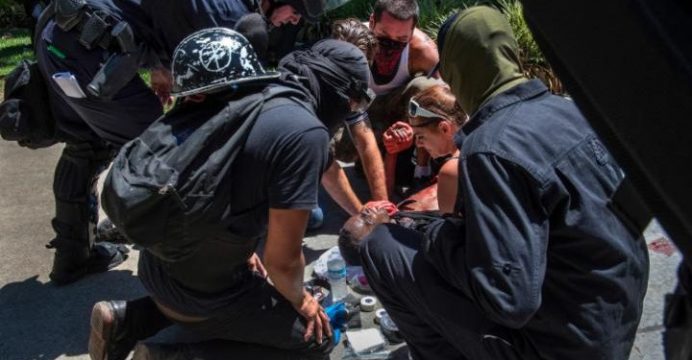 One female and 9 male patients had “multiple stab and laceration wounds,” the fire department said on Twitter. It was unclear to which group the wounded, who ranged in age from 19 to 58, belonged. Of those injured, at least two were in critical condition, Harvey said.

The stabbing spree broke out when some 25 neo-Nazis, who had permission to protest on the capitol’s west steps, clashed with more than 150 anarchists and “anti-fascist” counter-protesters, the Sacramento Bee newspaper reported. 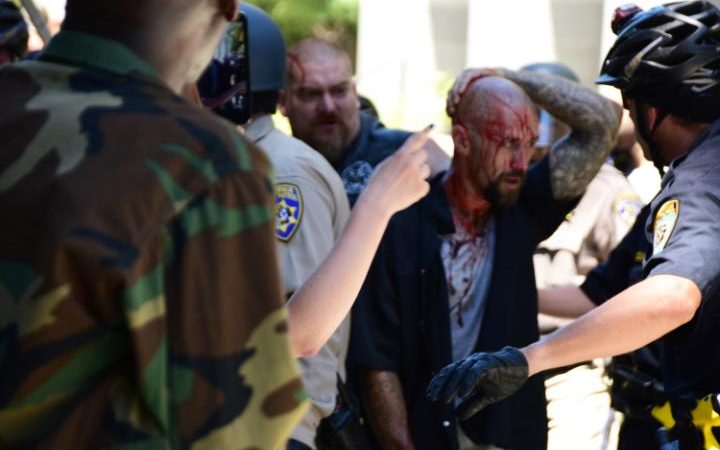 Videos and photos posted online showed the crowd grow violent, with some members swinging what appeared to be wood clubs, while others hurled rocks.

Crowd members helped an injured and bloody black man lying on the sidewalk in a video posted online by the Bee. Two white men with blood dripping down their shaved heads were escorted by police in footage taken by CNN.

Emergency responders received a call to the scene just before noon (1900 GMT). The event was staged by a white-supremacist, anti-immigration group called the Traditionalist Worker Party.

A sister organization, the Golden State Skinheads, said online ahead of the rally that members would “stand our ground if forced to that point.”

After the protest Traditionalist Worker Party leader Matthew Heimbach said in a statement broadcast by CNN that “the anti-fascists used knives, bottles, bricks and chunks of concrete they broke off a construction site.”

“When they attacked, our men defended themselves to be able to drive the attackers off,” he said.

Protesters had cleared the capitol lawn by mid-afternoon, the Sacramento Fire Department said.