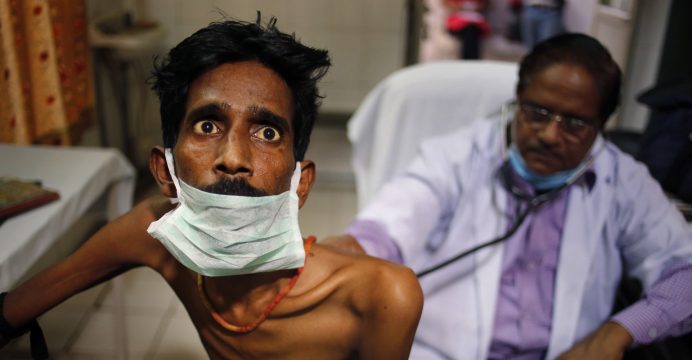 The scheme is a vitally important method for reaching patients in far flung villages where the TB incidence is usually higher. Inexpensive and simple, it taps into an already existing network of providers to ensure that those people have the knowledge and skills necessary to recognise TB and refer for testing.

Frequently practicing out of makeshift clinics with little formal medical training, RHCPs are often the first point of contact for medical care in India’s rural communities and, with an estimated 2.5 million working throughout the country, they represent a vital link to many areas where hospitals and medical centres may be difficult to reach.

The Union has developed a mobile phone application (app) that reinforces the training provided to the RHCPs, guiding them through common symptoms to assist in patient referrals. The app also delivers results of TB screenings directly to the RCHP’s phone, reducing the number of times patients have to travel to the treatment centre and helping to reduce the time between diagnosis and treatment initiation.

One of the RHCPs working with The Union is Tuti Mundu, who has spent much of the past 11 years treating patients from 15 neighbouring villages out of his home clinic in the village of Kudadih, in the Khunti district of Jharkhand. He has been involved in The Union’s RHCP outreach programme since July 2013 and is one of the RHCPs testing the mobile app.

“This initiative has helped me to expand my knowledge tremendously, connecting me to the government clinics and assisting in recognising TB symptoms to properly refer patients. The nearest TB testing centre is 10 kilometres from my clinic – patients are unlikely to go on their own if not encouraged by someone they trust,” he explains.

The three districts involved in the pilot phase of the project – Alirajpur, Madhya Pradesh, Ghazipur, Uttar Pradesh and Khunti, Jharkhand – were chosen based on the low TB symptomatic referrals and the difficulty in accessing medical care due to their hard-to-reach locations. The initial outcomes of the programme show an increase of 66 per cent in TB referrals and a 91 per cent treatment adherence rate in the patients receiving medications through the RHCPs, with many having already successfully completed treatment.

“The rural healthcare providers are popular in their villages and their involvement in the programme has helped to reduce delayed diagnoses and treatment initiation considerably,” explains Dr Prabhat Kumar, District TB Officer, Khunti, Jharkhand.