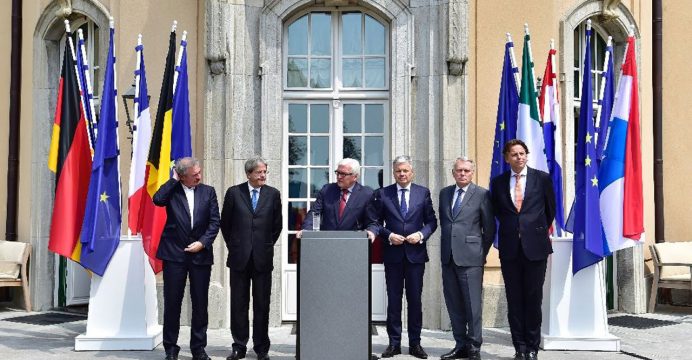 Britons had cast aside warnings of isolation and economic disaster to vote 52 percent-48 percent in favour of quitting the European Union in the June 23 referendum.

The historic vote, fought on the battlefronts of the economy and immigration, toppled Prime Minister David Cameron, pounded the sterling and led Moody’s to downgrade Britain’s credit rating outlook to “negative”.

Commuters heading into the City of London cross London Bridge in front of Tower Bridge on June 24, 2016

It exposed deep divisions in Britain too, as more than two million people desperately called for a new vote and support for Scottish independence surged.

Cameron has said he will stay on until a successor is found from within his governing Conservative party, which could take until October, at which point the new prime minister will launch the EU exit negotiations.

But European powers urged Britain not to delay amid fears of a domino-effect of exit votes in eurosceptic member states that could imperil the integrity of the bloc.

“We join together in saying that this process must begin as soon as possible so we don’t end up in an extended limbo period,” said German Foreign Minister Frank-Walter Steinmeier after a meeting in Berlin.

Ministers of the six original EU members — Germany, France, Italy, the Netherlands, Belgium and Luxembourg — held an emergency meeting to grapple with the first defection in the bloc’s 60-year history.

France’s Jean-Marc Ayrault directly urged Cameron to go quickly, telling AFP: “A new prime minister must be designated, that will take a few days but there is a certain urgency.”

With characteristic caution, German Chancellor Angela Merkel said only that Britain’s exit talks should not “drag on forever” and that until they were completed, Britain would remain a fully-fledged EU member.

“There is no reason to be nasty in the negotiations. We have to follow the rules of the game,” she said.

Earlier, European Commission chief Jean-Claude Juncker warned London against foot-dragging. “It is not an amicable divorce but it was also not an intimate love affair,” he said.

In an early sign of the Brexit fallout in Brussels, Britain’s European commissioner for financial services, Jonathan Hill, said he would stand down.

“I don’t believe it is right that I should carry on as the British commissioner as though nothing had happened,” he said.

Business groups in France and Germany on Sunday said EU nations should respond by working even more closely together to limit the “turbulence” caused by the Brexit shock.

At home, more than two million Britons signed up to a rapidly-growing petition on an official government website pleading for a new vote.

The number of signatories far surpassed the 100,000 required for a proposal to be discussed in the House of Commons. A committee will consider the motion on Tuesday.

“I am worried, really sick for my children’s prospects,” said Lindsey Brett, a 57-year-old secretarial worker.

“I was expecting a ‘Remain’ vote. I did not think we would come out,” she said in central London.

Scotland in particular stood aghast at the prospect of being dragged out of the 28-nation bloc with more than 60 percent of its people voting to stay in.

First Minister and Scottish National Party leader Nicola Sturgeon said the country was seeking “immediate discussions” with its EU partners to try to protect its position in the bloc.

“A second independence referendum is clearly an option that requires to be on the table,” she said after an emergency cabinet meeting, where ministers agreed to start drawing up legislation that could enable a second vote.

Scots backed staying in Britain in a 2014 referendum, but a new poll for the Sunday Times showed that 52 percent now back independence, with 48 percent against.

The often poisonous EU campaign revealed a split between what The Independent newspaper called “those doing well from globalisation and those ‘left behind’ and not seeing the benefits in jobs or wages”.

Opposition Labour leader Jeremy Corbyn is facing calls to resign over a perceived lacklustre campaign to stay in the EU, which resulted in many Labour voters choosing to leave.

“It’s your fault, Jeremy. When are you resigning?” shouted one party activist as Corbyn attended Gay Pride in London.

“I feel angry. Those who voted leave, they’re not going to fight the future,” said Mary Treinen, 23, a technological consultant from London’s trendy Shoreditch district.

Britain’s rejection of the EU is being seen as a victory for the anti-establishment rhetoric of the Brexit campaign, a feature of growing populism across Europe.

“Take a bow, Britain!” eurosceptic newspaper the Daily Mail wrote across its front page on Saturday.

“It was the day the quiet people of Britain rose up against an arrogant, out-of-touch political class and a contemptuous Brussels elite,” it said.