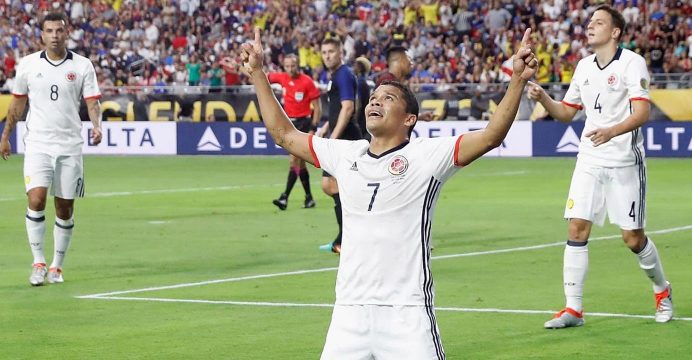 Carlos Bacca’s 31st minute goal Saturday night at University of Phoenix Stadium was enough for Colombia to defeat the U.S. 1-0 to finish in third place at Copa America Centenario.

Colombia captured third place for the fourth time in four appearances in the Copa America Third Place Match. Los Cafeteros beat the U.S. for the second time in this year’s tournament, the first being a 2-0 win in the opening game on June 3

The U.S. had hoped for their highest finish ever at a Copa America, but lost a Third Place Match for the second time in team history to Colombia. The first was in 1995 a year after the Americans defeated Colombia in the World Cup.

Bacca’s goal came in the 31st minute after James Rodriguez chipped a towards Santiago Arias on the right. Arias headed across and Bacca slid the ball into the net before U.S. defender DeAndre Yedlin could get to it.

The U.S. had four good chances to score in the first half, with Yedlin effective on runs from his right back position. After U.S. goalkeeper Tim Howard saved a Rodriguez shot in the 12th minute, Yedlin misfired after a pass to the wing from Gyasi Zardes in the 31st, just before Bacca’s goal.

Alejandro Bedoya, Bobby Wood and Jermaine Jones, all back from suspension from the Semifinal defeat to Argentina, each missed scoring chances in the first half. Wood hit the left post with a 62nd minute shot.

But perhaps the best U.S. chance came on Clint Dempsey’s free kick from well outside the box in the 51st minute. Ospina dived to his left to get a hand on the ball and keep his clean sheet in the process.

Colombia failed to add to their lead in the second half despite multiple opportunities, as Rodriguez fired wide in the 57th minute and Juan Cuadrado’s 61st minute shot hit the underside of the crossbar and stayed out. Howard came out of the goal to stop a shot by Edwin Cardona in the 81st minute.

Wood whiffed on a clear shot in the 83rd and the U.S. could not find the equalizer. The match got testy in the final minutes and Michael Orozco of the U.S. and Arias of Colombia were shown red cards just before the final whistle.