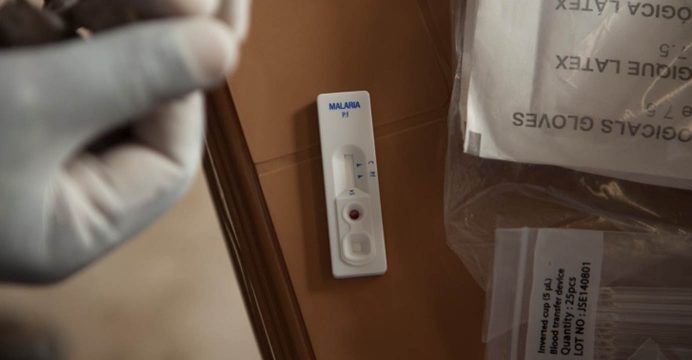 IOM is scaling up resources to respond to an upsurge in malaria cases at the UN protection of civilians (PoC) site in Bentiu, South Sudan. During the first two weeks of June, malaria cases have more than doubled, accounting for at least 50 per cent of all health consultations at IOM’s two primary health care clinics in the site and its mobile clinic in nearby Bentiu town.

The increase is attributed to the start of the rainy season, which leads to stagnant bodies of water and increases the spread of vector-borne diseases.

IOM has deployed 40,000 additional rapid diagnostic test kits for malaria to Bentiu, as well as additional anti-malarial medications. In coordination with the Health Cluster, IOM has begun registering all households in the site to receive mosquito nets to prevent malaria transmission.

Through health and hygiene promoters, IOM is reaching the community with key information on how malaria presents, where to get early treatment and prevention.

“Malaria is now the number one leading disease in the PoC site. All persons with fever are advised to come for early testing and treatment to reduce mortality and disease burden,” advises Dr. Andrew Mbala, IOM’s Migration Health Emergency Coordinator.

More than 95,000 internally displaced persons (IDPs) are currently seeking shelter at the site as a result of insecurity and depleted food resources since conflict broke out in South Sudan in December 2013.

Extensive land-works projects, led by IOM, since 2015 have significantly improved living conditions at the site, particularly through proper drainage structures that reduce flooding.

IOM continues to provide safe drinking water to more than 43,300 IDPs at the site on a daily basis, as well as maintain sanitation facilities and conduct regular waste disposal. As camp manager of the site, IOM also ensures timely coordination of humanitarian assistance and response to IDP needs.

The crisis in South Sudan has displaced more than 2.4 million people and left an estimated 6.1 million people in need of protection and humanitarian assistance. IOM continues to provide multi-sector assistance to displaced and vulnerable populations across the country, both in PoC sites and remote locations, as part of an effort to reach 5.1 million people with lifesaving aid this year.