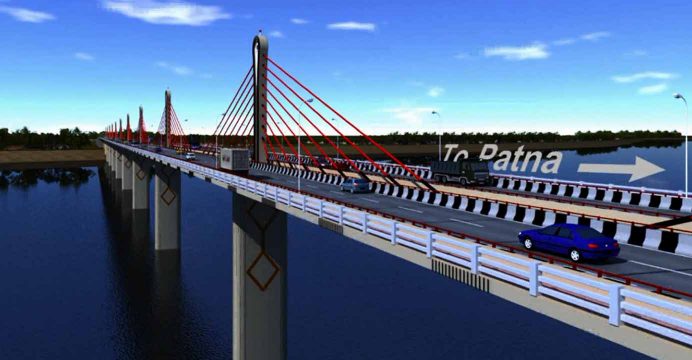 The Asian Development Bank (ADB) today approved a $500 million loan to build a bridge across India’s Ganges River. The 9.8 kilometer (km) road bridge in the northeastern state of Bihar will be India’s longest river bridge and will provide vital transport links between the northern and southern parts of the state and with neighboring Nepal.

“The new bridge will make it easier for people to move between jobs and markets, particularly for poorer communities in the north wishing to travel to the state capital, Patna, just south of the river,” said Dong Kyu Lee in ADB’s South Asia Department who is leading the project. “In all, the bridge is expected to benefit over nine million people.”

Bihar, the third most populous state in India with over 100 million inhabitants, has poverty levels above the national average, with seven out of 10 of the state’s poorest districts located in the north. Traffic volumes are rising but there are only four operational bridges along the 200 km stretch of the Ganges River that pass through Bihar state, and the capacity of existing bridges is already stretched, undermining connectivity and access to opportunities for northern communities.

The new Ganga Bridge, to be located near Patna, will span both channels of the Ganges River and serve as an alternate route to the existing Ganga Bridge, which has begun to deteriorate. Along with the bridge structure itself, the project will also build viaducts, embankments, and toll and service facilities, and will link to national highway networks. A key feature will be a year-round embankment access road for the 250,000 inhabitants of the Raghopur Diara river island, ending their reliance on boats and a seasonal pontoon bridge as their only links to Patna.

The bridge, using state-of-the-art engineering techniques, will be the first of its kind in India. The height and length have been designed to minimize impacts on the river itself and to ensure the bridge will be able to withstand climate-related stresses such as a rise in the water level.

Along with ADB’s loan and $900,000 in technical assistance to improve bridge operation and management, the state government of Bihar will provide support equivalent to $215 million. The project will run for about 4 years with an expected completion date of the end of December 2020.