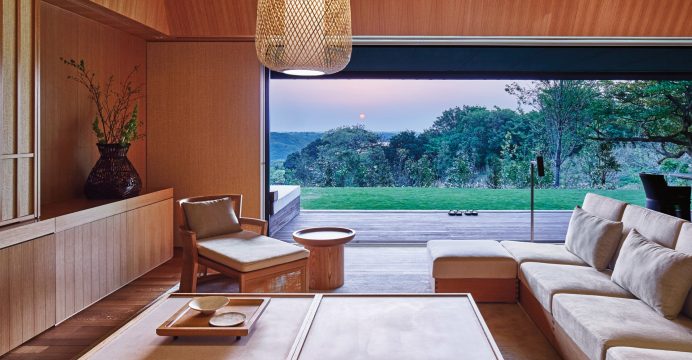 March 2016 welcomed the opening of Amanemu, a hot spring resort, located in the idyllic setting of Ise Shima National Park on the shores of Ago Bay. Providing the perfect rural complement to Aman Tokyo which opened in December 2014, and continuing Aman’s journey within Japan, Amanemu adopts a classic Japanese aesthetic in the ryokan tradition, with each of the 24 suites and four two-bedroom villas featuring their own onsen.

Amanemu offers an enlightening Aman journey through the region including private tours of the Ise Grande Shrine, Japan’s most sacred Shinto shrine. Visits with ama, female Japanese divers who played an integral role in the development of the pearl industry in the 19th Century, who today free-dive for shellfish such as oysters and abalone, trips to The Kumano Kodo, a series of five ancient pilgrimage routes in the heart of the remote Kii Mountains, recently named as UNESCO World Heritage routes can also be arranged.