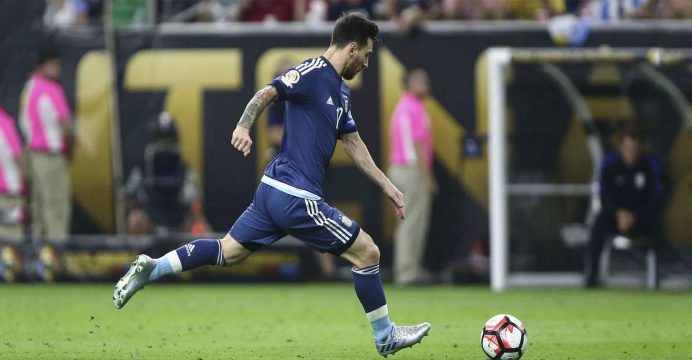 Argentina’s perfect run through Copa America Centenario continued with a 4-0 victory against the host USA in Tuesday’s Semifinal, with Lionel Messi putting on another show for a sellout crowd at Houston’s NRG Stadium.

Messi had a goal and two assists and Gonzalo Higuain scored twice in front of 70,858 spectator. Argentina, with all wins in Copa America Centenario matches, moved within one win of a record-tying 15th Copa America title. They will face the winner of Wednesday’s Semifinal with second semifinal winner Chile in the Final on Sunday in East Rutherford, N.J.

Messi’s chip to Ezequiel Lavezzi in the third minute produced the game’s first goal, and after being fouled in the 31st minute by Chris Wondolowski, the reigning World Player of the Year buried a free kick for his fifth goal of the tournament.

The magical Messi tied his shoe, eyed the target and curled the set piece kick away from the wall, past Brad Guzan and inside the top right corner. It was his 55th career international goal for Argentina, moving him past Gabriel Batistuta to become his nation’s all-time leading goal scorer.

Ranked 31st in the world, the U.S. faced monumental odds in trying to defeat top-ranked Argentina. Form held, the Americans got very few chances for a goal and will head to Glendale, Arizona to play in Saturday’s Third Place Match against the loser of Wednesday’s other Semifinal.

Argentina went up 3-0 on Gonzalo Higuain’s 50th minute goal. Higuain made his run, controlled a long pass into the box and saw his initial shot saved by Guzan before cleaning up the rebound. Then, on a giveaway in the 85th minute, Messi passed up a clear shot and slid the ball to Higuain for an easy finish to complete the scoring.

The victory was tempered slightly with a scary injury to Lavezzi, who tumbled over the sideboards trying to head a ball near the sideline in the second half. Lavezzi had his back to the boards when he fell over and was down for a few moments, but was able to get to his feet and be helped onto a stretcher.