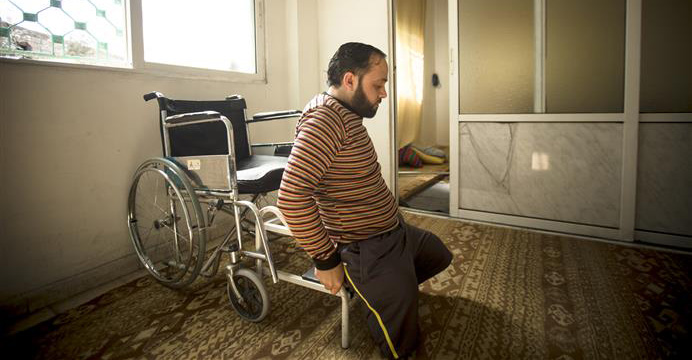 Omar Al Balkhi, 29, in March 2015. Omar was injured in a bomb blast in Daraa, Syria and treated at first in a field hospital. He was later transferred to the MSF War Trauma surgical project at Al Ramtha hospital in Jordan in order to undergo multiple surgeries. * PHOTO - ALI SAADI/MSF
DevelopmentMigration
Jun 22, 2016 News Hour Correspondent -

A massive 60 million people are now displaced worldwide – the largest number since World War II, according to the United Nations (UN). During 2015, an estimated 1,008,616 fled to Europe by sea. 84% of them came from refugee-producing countries, with 49% of them coming from Syria, 21% from Afghanistan and 9% from Iraq. 17% were women and 25% were children under the age of 18.

Despite winter conditions and attempts to close the Mediterranean Sea route, people have not stopped fleeing and between January and April 2016, more than 180,000 people have arrived in Europe. Another 1,200 people have died or gone missing on the way.

“We hope the war will come to an end, the bloodshed will stop and displaced people will be able to return home. But it seems it’s not likely to happen soon. We are doing what we can and even more. We are happy when we see our patients recover. It gives us more resolve to continue the work we are doing.”
– Yahya Jarad, nursing supervisor at MSF´s Al Salamah Hospital, Syria

Médecins Sans Frontières/Doctors Without Borders (MSF), the international medical humanitarian organization, believes that todays’ humanitarian crisis in Europe is the result of a collective catastrophic failure to respond to the urgent need for assistance and protection of over a million men, women and children.

“We are not asking for money, just for security”
– Danish, from Kunduz, Afghanistan

The lack of safe and legal options for people to flee, the razor wire fences, capriciously closed borders, squalid, inhumane reception conditions and the complicated, ever changing registration procedures aggravated the already miserable conditions imposed on thousands fleeing war, poverty and oppression. This served only to make fleeing more dangerous and increase the suffering of those on the move. 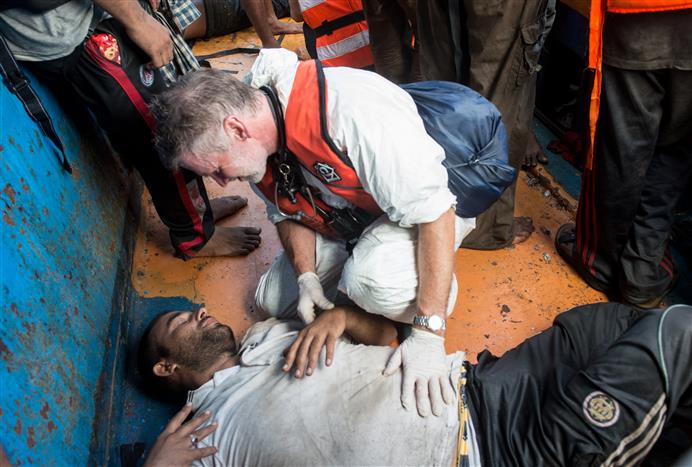 A critical patient suffering from suspected fuel inhalation lies in the hull of a wooden boat in August 2015. He was stabilised aboard the MY Phoenix, run by Médecins Sans Frontières/Doctors Without Borders (MSF) and another NGO, MOAS. He was ultimately medevac’ed via helicopter for further treatment on land. * PHOTO – GABRIELE FRANÇOIS CASINI/MSF

During 2015, MSF teams provided more than 100,000 medical consultations to refugees and migrants on its search and rescue vessels in the Mediterranean Sea, in Italy, Greece, in the Balkans and in Western Europe. But MSF rescuers are witnessing and hearing similar stories of fear, misery and violence the world over: from Morocco, Mexico, Yemen, Turkey, Bulgaria, Greece and southern Europe, and from Central and South American into the United States.

More locally, MSF teams witness it across the Andaman Sea; in Myanmar; and also in Kutupalong, Bangladesh, where MSF runs a clinic offering healthcare to Rohingya people fleeing Myanmar as well as for the local community in and around Ukhia.

“I am tired of being here and I’m tired of living in fear”
– Siham, 30, is from Halab in Syria. She was still in the camp of Idomeni, in Greece, late May when our staff collected this testimony by phone. 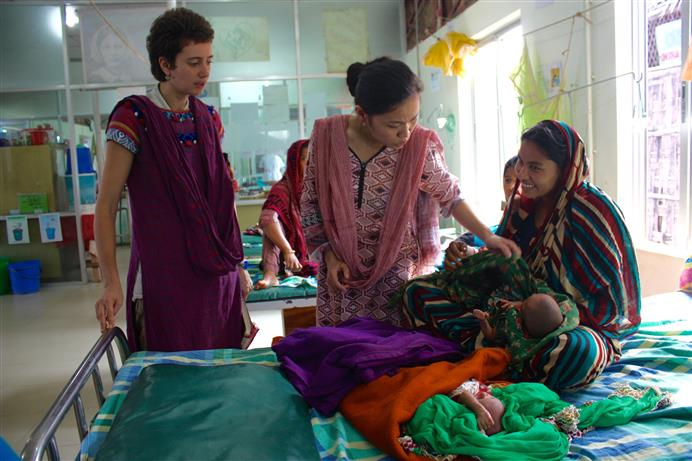 In a world plagued by conflict, poverty and inequality, population movements are inevitable and governments must find a way to manage migration that minimizes suffering rather than creating it. As a medical humanitarian organization with more than 40 years of experience providing assistance to people on the move, MSF’s request is simple: stop applying policies that kill and prolong anguish.

“We thought that Europe might protect people who have suffered the kind of suffering we have undergone. But we feel like criminals, forced to hide in the mountain. Look at where we are. We pray that someone hears us, so that the road opens. I don’t want to die here. I don’t want to die watching my grandchildren suffering. I don’t have much time left on this Earth, so I don’t have much longer to wait. Ever since what happened in Sinjar, I haven’t sung any more.”
– Khaled, a Yazidi man from Sinjar mountain in Iraqi Kurdistan. He is in Katsikas camp, Greece, with his family since March 18, 2016.The family apologized twice because they had no tea to offer, and offered to share the food distributed by the NGO.

In 2015, MSF teams on board three search and rescue ships in the Central Mediterranean assisted over 23,000 people in 120 separate rescue interventions. 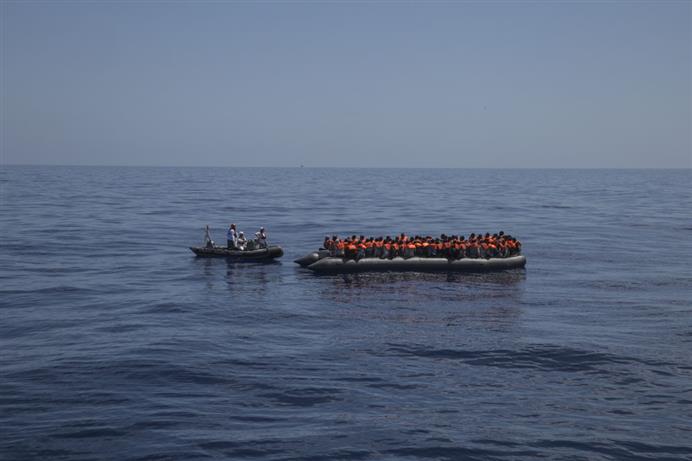 In 2016, Médecins Sans Frontières/Doctors Without Borders (MSF) resumed search, rescue and medical aid operations in the central Mediterranean Sea, between Africa and Europe for the second year. In its first rescue of 2016, May 5, the MSF ship Dignity 1 has rescued 123 people (119 men and 4 women) and transferred them to an Italian ship. * PHOTO – ANNA SURINYACH/MSF

The hardship people endure on these journeys is shocking for MSF teams to witness. They know first-hand the devastation war inflicts in places like Somalia, Syria and Sudan, the systematic discrimination in Myanmar and the subsistence living and constant social and political turmoil in many parts of Sub-Saharan Africa and South East Asia, which force millions to flee.

But they also hear horrific stories of the flight itself – people left to die of dehydration in the Sahara, packed like cattle into warehouses, trucks, and ships or raped, tortured and starved in Libya and Thailand. Indeed, the journey itself, both for the forcibly displaced and the so-called migrants can quite literally be fatal. 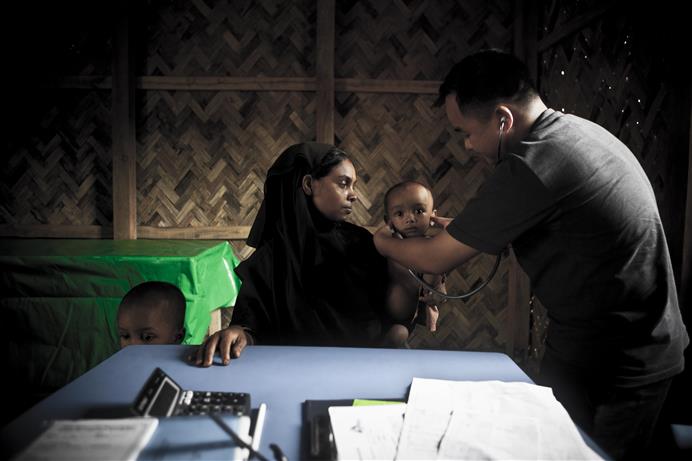 A young child receives a checkup at the Médecins Sans Frontières/Doctors Without Borders (MSF) clinic in Kutupalong in August 2009, the year MSF began running its current primary healthcare project providing medical care to the community in and around Ukhia and to Rohingya people fleeing Myanmar. * PHOTO – CRISTINA DE MIDDEL/MSF

“We don’t have any information about what will happen to us. We are lost here and no one cares. We left everything behind. I had a job, I was a tiler, we had a house. But we had no security: we were living in fear in Kabul; suicide attacks were happening every day, everywhere. I paid thousands of dollars to reach Greece and save my family lives. We want to go to Germany, where my cousin’s wife has lived for 15 years. We are just looking for peace. We are not numbers, we are human beings who need your solidarity.”
– Mohammed, from Kabul, Afghanistan

At the very least the chronic abuse suffered on the journey leads to lasting physical injury and psychological trauma. Again, governments must stop applying policies that kill and prolong the anguish; instead, they must provide protection and assistance based on humanitarian imperatives according to needs that ensure basic human dignity.