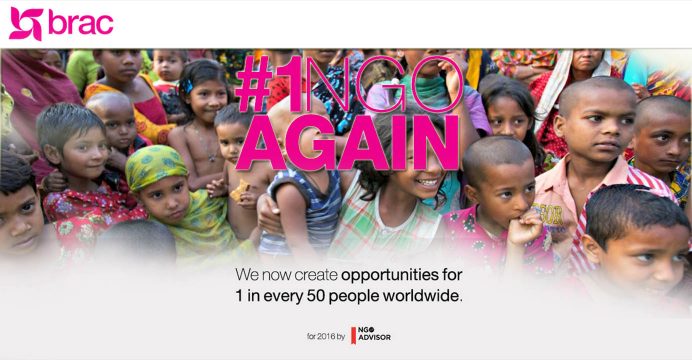 After claiming last year’s second spot, BRAC, the largest nongovernment development organization on the planet, is now ranked as number 1. A member of the era-defining 1970s wave of Bangladeshi microcredit and microfinance pioneers alongside the Grameen Bank and ASA, BRAC has since gone on to outpace its old counterparts and assume an unparalleled position in the crowded field of international development.

BRAC was ranked the number one NGO in the world by the Geneva-based NGO ADVISOR, an independent media organisation this year. Committed to highlighting innovation, impact and governance in the non-profit sector, NGO ADVISOR made the announcement on their website today. Ranked in the second position in 2015, BRAC returned to the top spot in the 2016 Top 500 NGOs this year.

“This recognition is truly an honour,” said Sir Fazle Hasan Abed, founder and chairperson of BRAC. “BRAC staff works tirelessly to both innovate and apply proven solutions at scale to empower people worldwide living in poverty. It is wonderful to see this dedication recognised.”

Of more than 500 development organisations worldwide, NGO ADVISOR placed BRAC first, based on its impact, innovation and sustainability. BRAC was praised for its holistic approach to fighting poverty, treating it as a system of interrelated barriers that must be addressed concurrently. The ranking also highlighted the organisation’s history of designing and implementing solutions at scale.

Other notable NGOs in the top 500 include Doctors Without Borders in the second position, Oxfam in fifth, Save the Children in the ninth, and Grameen Bank in the 12th position.

NGO ADVISOR combines academic rigour with journalistic integrity and autonomy, evaluating each organisation based upon its objective merits. Co-founded by Jean-Christophe Nothias, a journalist formerly with The Global Journal, the rankings methodology was first developed in 2009.

Over the years, Nothias enlisted experts at The University of Geneva and partners from the non-profit sector to improve the evaluation metrics. Today, NGO ADVISOR presents its findings to an international audience of donors, volunteers, journalists, researchers, diplomats and non-profit leaders to showcase best practices and mirror the evolving values of the global community.

Ultimately, BRAC has evolved into a giant of an NGO in a way that some could see as problematic – a non-public entity that touches the lives of more than 138 million people. Reassuringly, however, while size is not often an indication of quality, BRAC represents a welcome outlier and a continuing force for good at the global level.