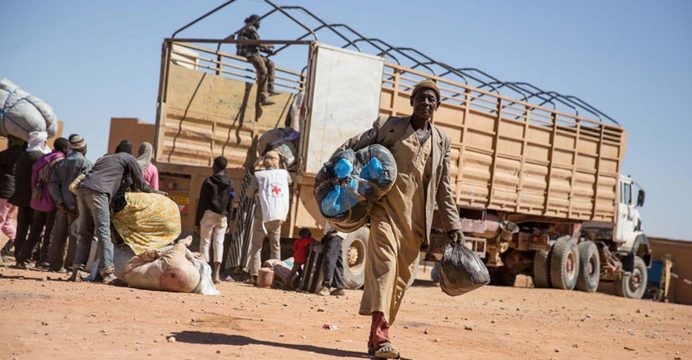 IOM notes the shocking discovery this week of the remains of 34 migrants near the Algeria-Niger border which brings to 471 the number of deaths and disappearances recorded on the African continent this year by IOM’s Missing Migrants Project.

“At least 250 migrants have died in Libya and Sudan alone, many due to exposure, starvation or dehydration in the Sahara Desert,” explained Julia Black, a researcher with IOM’s Global Migration Data Analysis Centre (GMDAC) in Berlin. She added: “There is also an alarming trend of violent deaths for migrants in North Africa, with dozens of cases of physical and sexual abuse of migrants directly leading to their death. It is likely that many more cases go unrecorded.”

The 34 victims this week were reported to have died in Niger, after being abandoned by their smuggler. These are the only deaths recorded by IOM in Niger, where IOM’s Displacement Tracking Matrix (DTM) operations estimate the passage this year of at least 120,000 migrants since January. Temperatures along migration routes through the Sahara frequently reach well above 40 degrees Celsius (104 Fahrenheit), and this most recent incident indicates that smuggling practices can be extremely deadly for migrants. The dangers of the heavily used route through the Sahara indicate that these deaths may be only a fraction of the true number of migrant fatalities across North Africa.

In addition to this week’s tragedy, the Missing Migrants Project estimates 85 of the 342 deaths in North Africa this year were of migrants headed to Spain’s Canarias archipelago off the coast of Morocco. It is likely that many go missing and are unreported on this oversea route, as well, “as it is a very long distance to travel to a very small group of islands,” Black explained.

Missing Migrants Project also has recorded 80 deaths in the Horn of Africa this year; 60 of those were drownings in the Straits of Yemen, a sea route many Somalis, Eritreans, and Ethiopians travel to reach the Arabian Peninsula. The remaining 21 deaths were recorded on land, as migrants travelled towards Sudan. Almost half of these were violent deaths, many at the hands of migrant smugglers. The mixed nature of flows through this region means that the precise numbers of migrant deaths are, again, underreported. Indeed, security officials in Djibouti – which hosts the principal land route connecting Ethiopia to the Straits of Yemen – told an IOM delegation earlier this year that sea deaths may account for around 25 percent of migrant fatalities in their country, with the vast majority occurring either from dehydration or vehicular accidents long before many migrants reach the coast.

In Sub-Saharan Africa, Missing Migrants Project data is very sparse. Nonetheless, IOM has recorded 49 deaths in this region so far during 2016 – an average of more than two per week. Of these, 20 were Somali migrants who were discovered Wednesday after suffocating in the cargo bay of a truck in Zambia.

In nearly 18 months since the start of 2015, IOM’s Missing Migrants Project has recorded 678 deaths of migrants across the African continent – Horn of Africa: 176; North Africa: 407; Western, Central and Southern Africa: 95, with 70 of those deaths occurring just in the past two weeks.

“These tragedies are in addition to the thousands of Africans who have died after successfully arriving at one of the many coastal launching zones, yet who fail to reach their destinations,” Black said.

Giuseppe Loprete, Chief of Mission for IOM Niger, this week said the deaths reported were of the 34 migrants found near the city of Arlit, a desert crossroads near Niger’s border with Algeria. He noted the discovery that most of the 34 victims were women or children which indicates that these are migrants from villages in southern Niger. “Women and children among the migrant group almost always mean migrants bound for Algeria,” Loprete explained.

A total of 20 were children under the age of 18, as well as nine adult females and five adult males, the IOM Niger chief added.

He said the cost of travel on this route – about USD 300-500 per person – runs about half the cost migrants currently are being charged to reach Libya from Niger. The Algeria route attracts poorer migrants, Loprete explained, migrants who may be exploited and forced into the sex trade and begging (especially minors) once they reach their destination. He added this route also may be even more dangerous than the path to Libya.

“Many more die that are not even reported,” Loprete said.