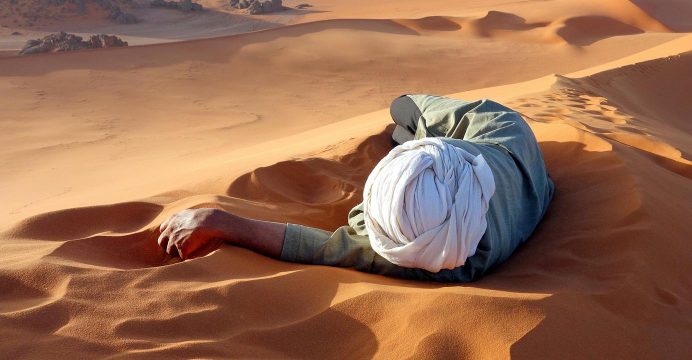 Save the Children said, “Reports that 34 people, 20 of them children, have been found dead in the Sahara desert, is yet another tragic example of lives lost along the refugee and migrant route.”

“The majority of children who make it to Italy reported harrowing and severely abusive journeys when interviewed by Save the Children. At the mercy of people smugglers and traffickers, they continue to face grave risks on their way to reach safety. We have heard of the horrors children face; many suffer appalling torture, abuse and exploitation as they make their way through sub-Saharan Africa on to Libya.”

The criminals that transport desperate families will continue to flourish as long as there are no safe and legal alternatives.

“International leaders are pulling up the drawbridge and prioritizing border control over saving lives. We must not rip up the moral rule book. If they continue the current course of inaction, we will continue to see children dying of thirst in the summer heat in the desert or drowning at sea, as they try to seek a better life.”

Ismail* from Somalia, 17 years old, told Save the Children in Italy: “We all got onto a truck, we were about 30 people, seven of us women, all Somali and in six days we arrived in the desert.”

“In the desert the traffickers took the women, and raped them. One of these was a woman who was seven months pregnant. We tried to stop them but they threatened us with arms. The woman who was pregnant, when she came back to the group took a scarf and tried to strangle herself but luckily we stopped her.”

“We tried to calm her, telling her that what had happened wasn’t her fault. We started driving again. The driver forced one of the women to sit next to him, without clothes, to do to him what he wanted. One of them told us ‘Welcome to Hell.'”

Save the Children gives children in the United States and around the world a healthy start, the opportunity to learn and protection from harm. We invest in childhood — every day, in times of crisis and for our future.