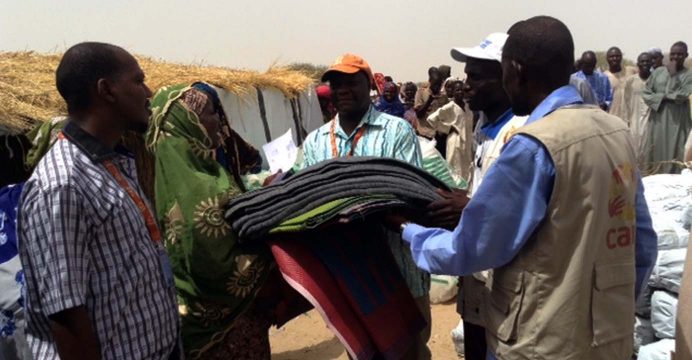 Several recent attacks by Nigerian militants across the border into the area of Bosso in southeastern Niger have forced refugees to flee further into the region of Diffa. The long forced walks towards safety without food and water – especially taxing on women and children – have caused several deaths, though the exact number is not yet established.

“I met with many families living under trees due to a lack of available shelter for those seeking safety” said Rotimy Djossaya, the Country Director for CARE International Niger following a recent visit to the Diffa region. “Many are being taken in by local families, with some households hosting up to 50 displaced people, while many others have no choice but to shelter in public buildings or find refuge in insecure places such as the open spaces along the main roads or in the bush”.

To date at least 241,000 people have been living in displacement in Diffa, and these recent events have caused a further 75,000 people to be newly displaced. CARE has been working in Diffa Region since 1998 and is already providing assistance by working with the UN refugee agency (UNHCR) to provide rapid relief to affected households in Diffa. The most urgent needs range from food, water, shelter and basic utensils to health care, protection and sanitation. Plus, with the onset of the rains, and with only one functioning health clinic in Diffa, pregnant or lactating mothers, and children, are at real risk of illness and disease.

Only 25 per cent (or $18 million) of the required $74 million for the Diffa region have been mobilized so far. “People here are terrified. This is one of the poorest places in the world and there is only so much that they can do to cope with this large influx of newly displaced people” says Djossaya. “If we are to avert a complete humanitarian catastrophe, urgent support is desperately needed now” says Djossaya.