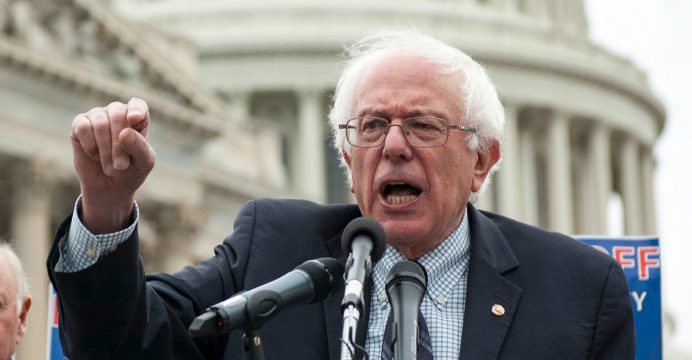 Liberal White House hopeful Bernie Sanders declined to bow out of his race against Hillary Clinton on Thursday, declaring that his “political revolution must continue” and urging supporters to help reform the Democratic Party, reports BSS.

But he stressed that he was prepared to work with his rival in order to best presumptive Republican nominee Donald Trump.

“The major political task that we face in the next five months is to make certain that Donald Trump is defeated and defeated badly,” Sanders said in a webcast to supporters.

“And I personally intend to begin my role in that process in a very short period of time.”

Former secretary of state Clinton has for all intents and purposes won their at-times bitter battle for the Democratic nomination.

Last week she clinched the number of delegates needed to become the party flagbearer next month at its national convention, and she shifted weeks ago to her likely showdown against Trump.

The self-described democratic socialist Sanders urged his millions of backers to keep taking on the political establishment.

“We must continue our grassroots efforts to create the America that we know we can become. And we must take that energy into the Democratic National Convention on July 25 in Philadelphia,” he said.

The 74-year-old Vermont senator launched an idealistic, visionary presidential campaign last year, and he was given little hope of making a major impact.

But his grassroots movement caught fire with young and independent voters angered with the paralysis in Washington, swelling economic inequality, and what Sanders has long decried as a corrupt campaign finance system.

“We have begun the long and arduous process of transforming America, a fight that will continue tomorrow, next week, next year and into the future,” Sanders said.

And while he did not officially throw in the towel, he said he looked forward “to working with Secretary Clinton to transform the Democratic Party so that it becomes a party of working people and young people, and not just wealthy campaign contributors,” he said.

For the past year Sanders has pressed for ending wealth and income inequality, reforming the criminal justice system, expanding health care and family leave, and raising the minimum wage.

While acknowledging the “strong disagreements” he had with Clinton, he also did not hesitate to criticize the party in general for not competing in states that seen as Republican territory, and called for a “new generation” of Democratic politicians.

“Sadly, the current Democratic Party leadership has turned its back on dozens of states in this country and has allowed right-wing politicians to win elections in some states with virtually no opposition, including some of the poorest states in America.”