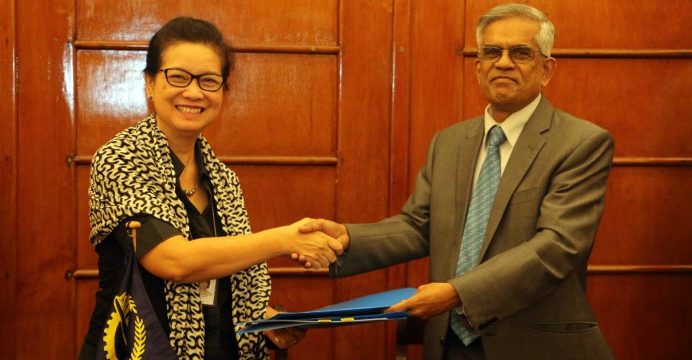 The Government of Sri Lanka and the Asian Development Bank (ADB) today signed a $2 million grant agreement to finance relief efforts in the country following the recent floods and landslides which claimed the lives of around a hundred people and damaged the homes and livelihoods of hundreds of thousands more.

“Considering the scope of the damage in Sri Lanka and the government’s constrained resources, it is critical that we assist the people of Sri Lanka in this time of urgent need,” said Sri Widowati, Country Director of the Sri Lanka Resident Mission.

The $2 million is being provided to the government as a grant under ADB’s Asia Pacific Disaster Response Fund to purchase emergency relief materials and supplies and help restore community services.

Ms. Widowati signed the grant on behalf of ADB while R.H.S. Samarathunga, Secretary to the Treasury, Ministry of Finance, signed for the Government of Sri Lanka.

Tropical Storm Roanu, which struck Sri Lanka on 15 May, caused severe flooding and numerous landslides, particularly in the west of the country. Twenty two of Sri Lanka’s 25 districts were affected by the storm with an estimated 500 houses destroyed and a further 3,800 partially damaged. In some places, entire villages were submerged. As a result of heavy rains, several major reservoirs overflowed and flood gates were fully opened to avoid a dam breach, causing flooding downstream. Major landslides in two districts of Sabaragamuwa and the Central province caused further havoc and buried several villages in mudslides.