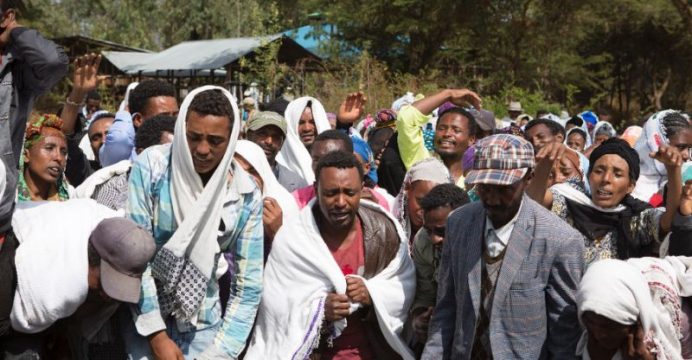 More than 400 people have been killed in Ethiopia since November in a crackdown on anti-government protests, Human Rights Watch said on Thursday, but the government immediately dismissed the claims, according to BSS.

“Tens of thousands” more were also arrested by security forces in “widespread protests in the Oromia region since November 2015,” the US-based HRW said.

The protests were sparked by plans to expand the capital into outlying farmland. The report, titled “Such a Brutal Crackdown”, was based on over 125 interviews with protestors and those caught up in the violence.

It spoke of the “government’s use of excessive and unnecessary lethal force and mass arrests, mistreatment in detention, and restrictions on access to information to quash the protest movement.”

The demonstrations were triggered by a government plan to expand the boundaries of Addis Ababa into Oromia. The project was dropped on January 12 but protests continued for weeks.

But government spokesman Getachew Reda dismissed the report, saying that HRW, “is very generous with numbers when it comes to Ethiopia” and attributed any violence on the part of security forces to “bad apples”.

“The government feels regret that people are killed,” he said.

“Why couldn’t they come up with others’ names? Because those names don’t exist,” Reda said.

HRW however said it along with other organisations had “identified more than 300 of those killed by name and, in some cases, with photos”, and it was not a case of isolated pockets of violence.

Some of those arrested and later released told HRW they were “tortured or mistreated” inside prison, with several women alleging they were raped.

“Some said they were hung by their ankles and beaten; others described having electric shocks applied to their feet, or weights tied to their testicles,” HRW said.

With at least 27 million people, Oromia is the most populous of the country’s federal states and has its own language, Oromo, distinct from Ethiopia’s official Amharic language.