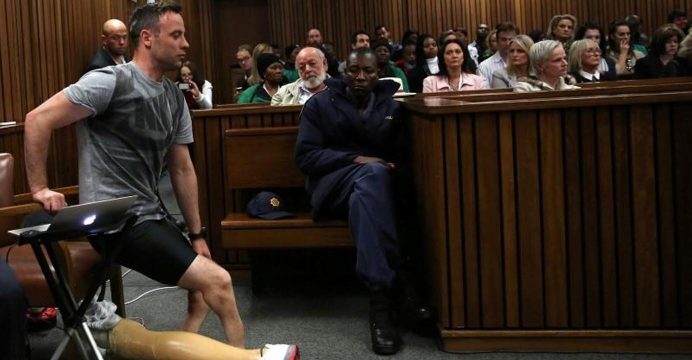 Olympic runner Oscar Pistorius shuffled through a Pretoria court without his prosthetic legs on Wednesday to show how vulnerable he is as the Paralympian seeks to avoid prison for murdering his girlfriend Reeva Steenkamp.

The 29-year-old faces a minimum 15-year jail term for the Valentine’s Day killing in 2013 in a case that has attracted worldwide interest and divided South Africa. He will be sentenced on July 6.

Pistorius has always said he mistook Steenkamp for an intruder when he fired four shots through a locked toilet door in his Pretoria home, killing her almost instantly.

Trembling and tearful, he rested his right hand on a desk for support as his lawyers pleaded with a judge to sentence him to community service rather than prison.

Dressed in a T-shirt and athletic shorts, Mr. Pistorius, 29, is barely three and a half feet tall without the J-shaped carbon-fiber prosthetic legs that earned him the nickname the Blade Runner, an image far more humble than that of the world-class athlete who successfully challenged able-bodied athletes. 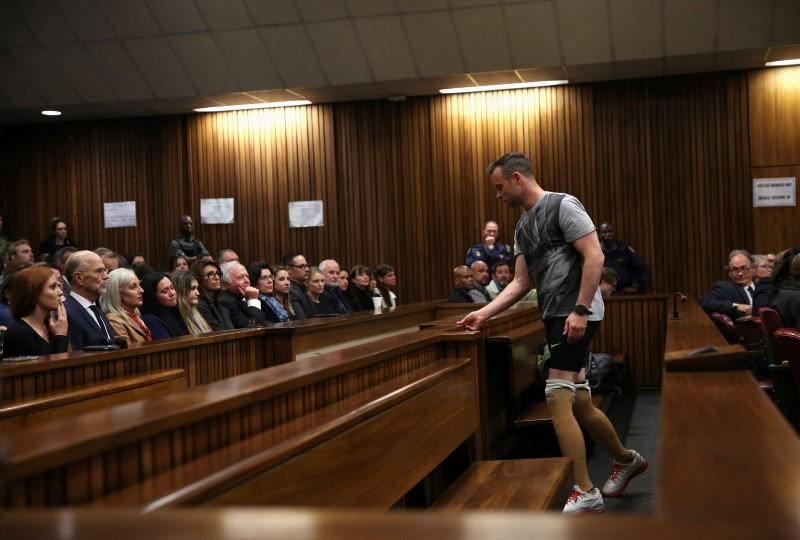 Paralympic gold medalist Oscar Pistorius prepares to walk across the courtroom without his prosthetic legs during the third day of the resentencing hearing for the 2013 murder of his girlfriend Reeva Steenkamp, at Pretoria High Court, South Africa June 15, 2016.

It was the most dramatic moment in the third day of a sentencing hearing before Judge Thokozile Matilda Masipa of the North Gauteng High Court. The judge said on Wednesday that she would issue her ruling on July 6, news reports said.

During his closing arguments, defence lawyer Barry Roux asked the gold medallist, known as the “Blade Runner” for his carbon-fibre prosthetics, to walk on his stumps to show the difficulty he faced dealing with the threat of an intruder.

The lower part of his legs were amputated when he was a baby.

His body shaking with emotion, Pistorius removed his prosthetics and stood on his stumps for about five minutes in front of the court television camera, wiping tears with a tissue.

Mr. Pistorius’s defense lawyers had asked him to take off his prosthetic legs to highlight the sense of vulnerability they say he felt when, acting out of fear and confusion, he fatally shot his girlfriend, Reeva Steenkamp, early on Feb. 14, 2013.

“The accused was vulnerable because of his disability,” Roux said. “His failure to conduct a rational thought process does not negate his vulnerability.”

The defence says Pistorius did not deliberately kill model and law graduate Steenkamp and was “a broken man”, calling for a non-custodial sentence that includes community service.