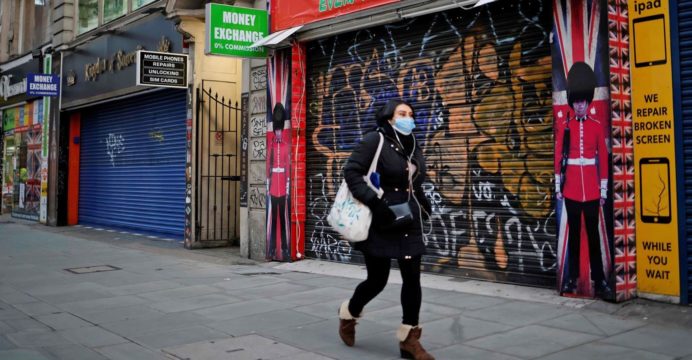 The contraction in 2020 “was more than twice as much as the previous largest annual fall on record”, the Office for National Statistics (ONS) said.

However, the economy looks set to avoid a double-dip recession after growth picked up at the end of the year. In December, the economy grew by 1.2%, after shrinking by 2.3% in November, as some restrictions eased, reports BBC.

The growth meant that in the October-to-December quarter the economy expanded by 1%. As a result, the UK is expected to avoid what could have been its first double-dip recession since the 1970s.

A double-dip is when the economy briefly recovers from recession, only to quickly sink back. A recession is generally defined as two consecutive quarters where the economy contracts.

ONS deputy national statistician Jonathan Athow said: “An increase in Covid-19 testing and tracing also boosted output. The economy continued to grow in the fourth quarter as a whole, despite the additional [lockdown] restrictions in November.”

GDP was first measured in the aftermath of the Second World War, and the measure has never previously dropped by more than 4.1% in a year. However, the Bank of England models GDP going back centuries, and the 2020 contraction could be the worse since 1709.

Suren Thiru, the head of economics at the British Chambers of Commerce, said: “Despite avoiding a double-dip recession, with output still well below pre-pandemic levels amid confirmation that 2020 was a historically bleak year for the UK economy, there is little to cheer in the latest data.”

All four economic sectors tracked by the ONS saw a drop in output, with the highest fall coming in the construction sector, which contracted by 12.5%.

Chancellor Rishi Sunak told the BBC: “Today’s figures show that last year our economy experienced a significant shock, and also some signs of resilience over winter.

“You know what’s clear is right now, many families and businesses are experiencing hardship. That’s why we’ve put in place a comprehensive plan for jobs to support people through this crisis, and we will set out the next stage of our economic response at our Budget in early March.”

But shadow chancellor Anneliese Dodds said: “These figures confirm that not only has the UK had the worst death toll in Europe, we’re experiencing the worst economic crisis of any major economy.

“Businesses can’t wait any longer. The chancellor needs to come forward now with a plan to secure the economy in the months ahead, with support going hand-in-hand with health restrictions.”

However, Mr Sunak said international economic comparisons were not necessarily a useful yardstick.

“We calculate GDP in a different way to pretty much everybody else. And if you either correct for that difference or look at it in a way that’s more comfortable with nominal GDP, what you find, as the Bank of England and the ONS have pointed out, is that our performance is very much in line and comparable to other countries.”

Economists said that with Covid-19 restrictions expected to remain until early spring, the hit to the economy will continue over the next few months.

“We anticipate a sharp decline in activity during the first quarter of the year,” said Kemar Whyte, senior economist at the National Institute of Economic and Social Research. “Nevertheless, growth will pick up from the second quarter onwards as restrictions ease on the back of a successful vaccination programme.”