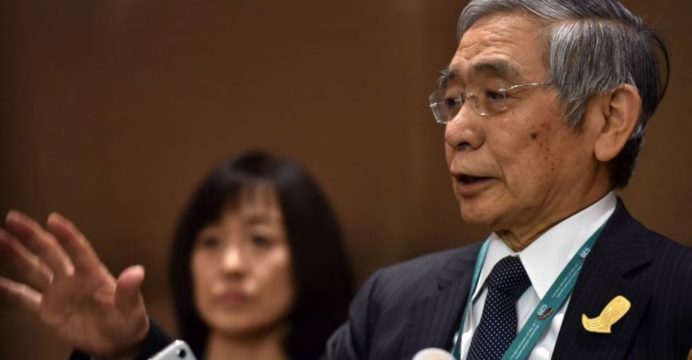 Share prices in Asia have risen after Japan’s central bank promised to help protect markets from the impact of the coronavirus.

It comes after data showed Chinese factory activity fell in February at the fastest rate on record. On Friday the US Federal Reserve made a similar pledge to stop more big falls on the world’s financial markets, reports BBC.

Last week concerns about the outbreak wiped more than $5 trillion from global stocks.

In a rare emergency statement, Bank of Japan (BOJ) Governor Haruhiko Kuroda said the central bank would take necessary steps to stabilise financial markets: “Overseas and domestic financial markets continue to make unstable movements due to heightening uncertainty over the impact on the economy from the spread of the coronavirus.”

“The BOJ will monitor developments carefully, and strive to stabilise markets and offer sufficient liquidity via market operations and asset purchases,” he added.

The language used in the announcement suggested the central bank is ready to make full use of its existing tools to inject funds into the market, before considering what other steps it may take.

It is the first time that the governor of the Bank of Japan has made this kind of statement since June 2016, when the UK voted to leave the European Union.

It follows a similar unscheduled announcement by the chairman of the US Federal Reserve. On Friday Jerome Powell said the central bank is watching developments closely for risks to the US economy and promised to take action if necessary.

On Monday the privately-run Caixin/Markit Manufacturing Purchasing Managers’ Index showed the fastest rate of contraction in China’s factory activity since the survey was launched in 2004. That followed the release on Saturday of equally weak official numbers.

Both sets of data come after employers across the country were ordered to remain closed after the annual Chinese New Year holiday as part of attempts by authorities to stem the spread of the virus.

The falls, which were even worse than the slump seen during the 2008 global financial crisis, highlighted the outbreak’s huge impact on the world’s second-largest economy.

Over the weekend senior officials in President Donald Trump’s administration also tried to soothe concerns about the impact of the outbreak, highlighting the US economy’s underlying strength.

US Vice President Mike Pence, who is leading the administration’s response to the coronavirus, said that the stock market “will come back”, adding that “the fundamentals of this economy are strong”.