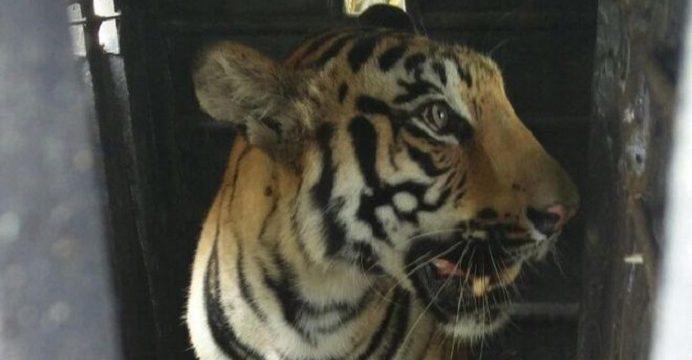 A court in India’s western state of Maharashtra has upheld an order to kill a two-year-old tigress responsible for killing four people. Wildlife activists had challenged a shoot-to-kill order issued by the state forest department on 23 June.

The tigress was first captured in July after killing two people and injuring four in the town of Brahmapuri, in Maharashtra. It was set free in Bor Tiger Reserve but has since killed two more people, reports BBC.

Dr Jerryl Banait, who opposed the order to shoot the big cat, told reporters that he would challenge the verdict in India’s Supreme Court.

Animal rights activists insist the tigress should be tranquilized and moved to another location. But panic is growing among the locals in its territory.

Forest officials who have been tracking the animal, which is named Kala, said it has covered more than 500km (310 miles) since entering the reserve on 29 July.

India is home to 60% of the world’s tigers, which are threatened by loss of habitat, and poachers who kill them for body parts used in traditional Chinese medicine.

With increasing human encroachment into their reserves, tigers often compete for resources with nearby villagers, leading to conflict.

Tiger deaths have steadily gone up in recent years. In 2015, Indian officials reported 80 tiger deaths, compared to 78 in the previous year.

Most attacks on people are chance encounters gone wrong, and the victims have rarely dragged away as prey. However, a series of attacks on people in quick succession is considered a tell-tale sign of a man-eater at work.