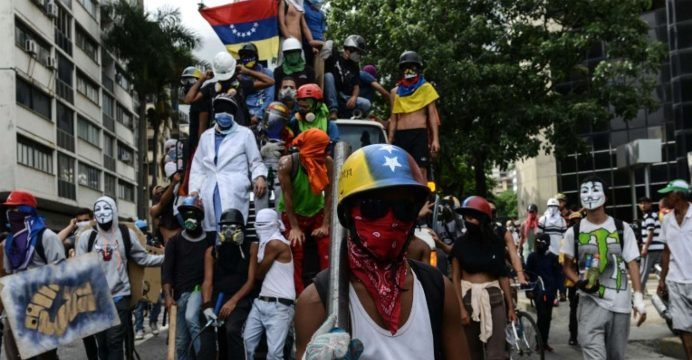 Venezuela’s government battled growing international isolation on Tuesday, after the UN slammed it for using “excessive force” against protesters and Latin American nations condemned it for breaking “democratic rule.”

President Nicolas Maduro invited allied nations including Cuba and Bolivia to Caracas, where their representatives echoed his assertion that Venezuela is the target of a plot by the “imperialist” United States.

“Venezuela is the big prize, the jewel of the crown — that’s what they say in the corridors in Washington,” Maduro told his allies, saying the United States has designs on Venezuela because of its oil and mineral wealth.

Meanwhile, Caracas stepped up moves against the opposition, whose protest movement appears to be losing steam as repression against it increases. Four months of street violence have left nearly 130 dead.

Venezuela’s supreme court sentenced a prominent opposition mayor, Ramon Muchacho, to 15 months in prison and stripped him of his right to hold political office. He was convicted on charges of not preventing protests in his district in the capital.

And a loyalist “Constituent Assembly” — a body with supreme powers installed last week after elections marred by violence and allegations of fraud — passed a law creating a “truth commission” to prosecute opposition leaders.

Over the weekend, the assembly fired the attorney general, Luisa Ortega, who had broken ranks with Maduro to become an outspoken critic of the direction he was taking.

The UN rights office on Tuesday slammed “widespread and systematic use of excessive force and arbitrary detentions against demonstrators in Venezuela.”

It highlighted the use of force “to instill fear, crush dissent, and to prevent demonstrators from assembling, rallying and reaching public institutions to present petitions.”