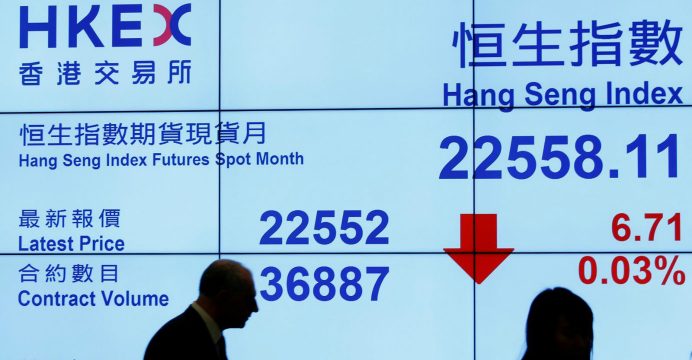 Another sell-off in energy firms dragged Asian markets lower on Wednesday, tracking hefty losses on Wall Street as oil prices tanked, while Shanghai was muted despite MSCI’s decision to include mainland-listed firms in a key index.

Crude sank more than two percent on Tuesday as traders grow increasingly worried about a global supply glut as continued production in the US and elsewhere offsets an OPEC output cut deal. The fall also came despite a drop in US inventories, reports BSS.

“Oil prices have officially entered a bear market (and) plummeted two percent after reports of rising output for from Nigeria and Libya — both OPEC members exempt from the production cut deal,” said Stephen Innes, senior trader at OANDA.

The crude sell-off, which means the commodity has lost a fifth of its value from recent highs, saw energy firms drag Wall Street down with all three main indexes ending deep in the red and while both main contracts stabilized on Wednesday, Asian energy firms followed their US counterparts.

Rio Tinto sank 2.5 percent and BHP dived more than three percent in Sydney, while Hong Kong-listed CNOOC was more than one percent off and Inpex fell 1.8 percent in Tokyo.

Shanghai bucked the trend to edge up 0.3 percent but the gains were minimal despite MSCI finally approving mainland-listed stocks, or A-shares, for its emerging markets index.

The agreement, after three previous rejections, means for the first time foreigners will be able to buy into Chinese markets directly, providing a possible $8 billion of inflows in the near term.

It is also seen as another step for the country’s leaders in further opening up to the world economy and asserting Beijing’s growing importance to global finance.

However, analysts pointed out that while the decision is important, Chinese stocks will only account for 0.7 percent of the index when they are included next June.

Northeast Securities analyst Shen Zhengyang said: “The thing itself is a good thing. But it has limited benefit for the market. The money that will come in is just a drop in the bucket, while the market’s liquidity itself isn’t sufficient at the moment due to the deleveraging process in the financial system.”

The yuan edged up on the MSCI move but the pound continued to struggle against the dollar has taken a hit on Tuesday after Bank of England governor Mark Carney dismissed an interest rate hike anytime soon.

Carney’s comments disappointed investors after a recent run of rising inflation suggested the BoE could lift borrowing costs again. Adding to the pound weakness was ongoing speculation about how tough Brexit terms will be after negotiations on Britain’s departure from the EU got under way.