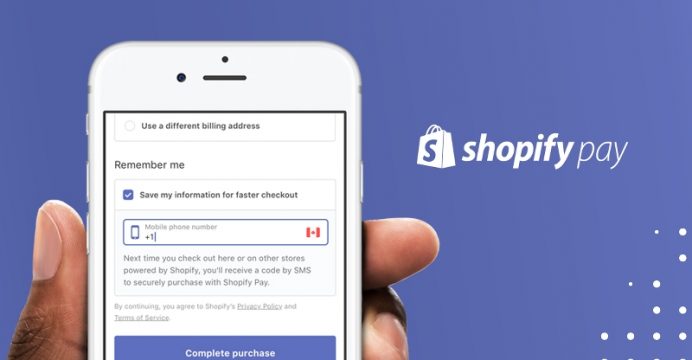 Customers can check out in seconds with Shopify Pay

With Shopify Pay, customers can now check out in seconds by entering a 6-digit verification code sent directly to their phone. They’ll no longer need to spend time typing in their shipping and payment details anytime they want to buy from you, or any other store powered by Shopify.

Shopify Pay will be made available to every store using Shopify Payments over the coming weeks, at no additional cost.

To make check out faster and simplified, Shopify Pay has been designed giving customers a better experience while also boosting your conversion rate.

Many Shopify stores are now accepting Shopify Pay. These stores have seen checkout completion times that are up to 40% faster, and a conversion rate that’s up to 18% higher for returning customers.

Shopify Pay is safe and secure. Customer’s information is encrypted and securely stored on Shopify’s PCI compliant servers. And, the SMS verification codes ensure that only the account owner can check out using Shopify Pay.

After entering their shipping and payment details, shoppers can opt-in to have their information saved with Shopify Pay. Next time they check out at any store powered by Shopify, they’ll simply type in their email address, followed by a verification code they receive via SMS.

Shipping and payment information will be pre-filled and customers can complete the purchase with a single tap or click.

Shopify was founded in 2004 and was initially based on earlier software written by its founders for their online snowboard store. The company reports that it has more than 377,500 merchants using its platform,[5] with total gross merchandise volume exceeding $15 billion.