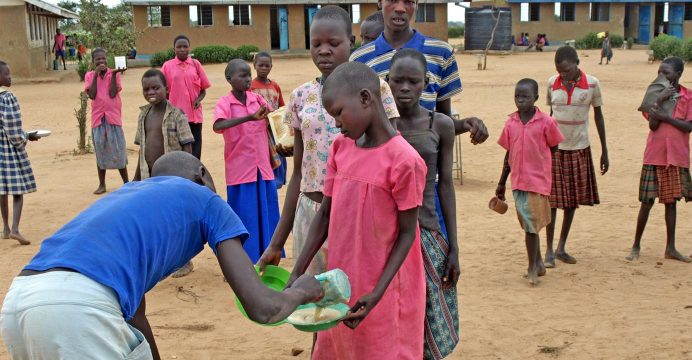 Japan is providing fund to boost nutrition among children in Karamoja

The United Nations World Food Programme (WFP) today welcomed a contribution of US$2.5 million from the Government of Japan, intended for boosting the nutrition of 50,000 infants, mothers and pregnant women in Karamoja to prevent child stunting.

“WFP is extremely grateful that Japan appreciates the critical importance of good nutrition in Uganda’s poorest region, Karamoja, and has chosen to support us in nourishing the futures of vulnerable children,” said WFP Acting Country Director Mike Sackett.

“Some 39.5 percent of young children in the Karamoja region are stunted due to poor diets, and Uganda loses 5.6 percent of its Gross Domestic Product (GDP) each year due to the effects of childhood under nutrition,” Sackett said. “In spite of this, WFP’s mother-and-child initiative designed to address stunting in Karamoja has been chronically underfunded, so this support from Japan is especially vital.”

WFP provides its support through the district health centres, where the Government and NGOs provide antenatal and postnatal care, child immunization, growth monitoring services and health and nutrition education. WFP’s assistance is intended to boost the nutrition and health of children aged 6-23 months and raise awareness of good nutrition and hygiene practices.

Sackett said WFP will use Japan’s contribution to purchase 1,700 metric tons of specialized foods, sugar and fortified vegetable oil for children aged 6-23 months and for pregnant and breastfeeding women.

The food will be enriched with protein, vitamins, minerals and other nutrients essential in a child’s first 1,000 days, from conception to the child’s second birthday. Inadequate nutrition during this crucial period can lead to irreversible damage to minds and bodies, affecting a child’s ability to grow, learn and eventually rise out of poverty. People affected by stunting, or reduced growth, are more likely in later life to be ill, to perform poorly at school or drop out of classes, to be less productive at work and even to die early.

The Cost of Hunger in Africa: Uganda 2013 study found that Uganda loses UGS 1.8 trillion (approximately $531 million currently) annually – as much as 5.6 per cent of its GDP – due to the effects of poor child nutrition. The study was conducted by the Government of Uganda with the support of WFP, the African Union Commission including New Partnership for Africa’s Development (NEPAD) and the UN Economic Commission for Africa.