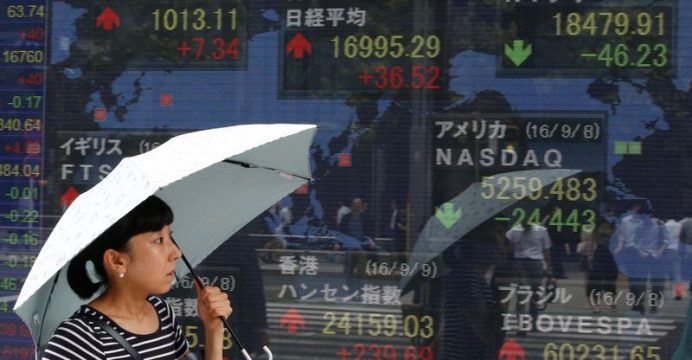 Asian markets mostly rose on Monday as traders gear up for huge central bank meetings in the US and Japan this week, hoping authorities press on with their loose monetary policies.

Concern that years of cheap cash could be coming to an end has roiled markets this month with conflicting comments from top Federal Reserve officials over the need for an interest rate hike fuelling uncertainty, reports BSS.

And a lack of any concrete promises from Tokyo about the Bank of Japan’s plans have also been causing for worry, with years of bond-buying and government spending having little impact on the country’s torpid economy.

“There are growing concerns about the limits of monetary policy’s impact on growth,” Bernard Aw, a markets strategist in Singapore at IG Ltd, said in an e-mail to clients.

“Unlike the Fed, where investors have a binary view — hike or no hike — of US monetary policy, the BoJ presents a complicated situation. Governor (Haruhiko) Kuroda has repeatedly stressed that they still have many policy tools at their disposal.”

Shanghai, which was also closed on Thursday and Friday, was up 0.6 percent while Seoul gained 0.6 percent and Singapore added 0.4 percent. Sydney, however, was 0.3 percent lower.

Tokyo was closed for a public holiday. The dollar held on to most of Friday’s gains against the pound and euro after the release of data showing an uptick in inflation during August.

On oil markets, prices climbed as fighting erupted in Libya, with forces loyal to the UN-backed unity government launching an offensive Sunday to retake key ports seized last week by fighters from a rival administration.

The commodity had fallen to a one-month low prior to the unrest in the country, which has Africa’s largest reserves. West Texas Intermediate was up 70 cents at $43.73 and Brent added 68 to $46.45.

However, gains will be limited owing to a global supply glut and overproduction. Traders are keenly awaiting a meeting between OPEC and Russia next week aimed at addressing the issue, although there are worries about the chances of a deal being reached.