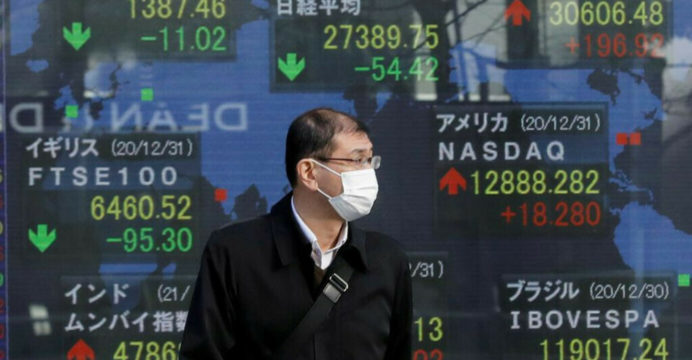 Stocks drifted in Asia on Monday

Stocks drifted in Asia on Monday as investors await key US jobs data, while girding themselves for a corporate earnings season many fear will highlight the impact of surging inflation and interest rates.

A report showing prices rose in the eurozone at a record pace last month added concerns that central bank tightening has a long way to go, while Federal Reserve vice chair Lael Brainard said US officials would not pull back too early, reports BSS.

Banks’ battle against inflation could also be made harder as OPEC and other oil producers consider a major output cut owing to a plunge in prices caused by demand worries. Crude prices jumped more than three percent in Asian trade ahead of the possible cut.

Traders are also keeping an eye on developments in Britain as the ruling Conservatives hold their annual conference a week after new finance minister Kwasi Kwarteng shocked markets with a massive borrowing-dependent, tax-cutting mini-budget.

All three main indexes on Wall Street ended down again Friday, registering a third straight quarter of losses for the first time since the global financial crisis in 2009.

The release of US jobs data on Friday will be closely watched, with a strong reading likely to give the Fed more ammunition to unveil a fourth successive bumper rate hike at its November meeting. Asian markets fluctuated at the start of the week. Hong Kong dipped along with Sydney, Singapore, Taipei, Jakarta and Wellington.

Tokyo rose, however, even as the Bank of Japan’s Tankan survey showed confidence fell among the country’s largest manufacturers for the third straight quarter. Manila also rose. With inflation remaining elevated, there is little prospect that the pain will ease any time soon.

On Friday, Brainard said: “Monetary policy will need to be restrictive for some time to have confidence that inflation is moving back to target.

“For these reasons, we are committed to avoiding pulling back prematurely.”

The comments were in line with other Fed officials, who have indicated borrowing costs were unlikely to be lowered until late 2023 or 2024.

“Last week’s developments reinforced our expectation that we will see further tightening in financial conditions, but also illustrated the short-term two-way volatility, which will likely accompany it,” Citigroup’s Ebrahim Rahbari said.

At a time of rising real rates, volatility and the strong dollar “we therefore remain very bearish regarding the outlook for global risk assets”, he added.

Markets are now bracing for company earnings reports, with traders keeping a close eye on their forecasts in light of the uncertain rate environment.

Saxo Capital Markets analysts said in a note that there was a risk-off mood “as corporate earnings misses continue to raise the threat of an ugly earnings season ahead”.

Both the US benchmark West Texas Intermediate crude and Brent climbed 3.3 percent, as major producers discussed a one million barrel per day cut in output to support prices in the face of falling demand.

The reduction would be the biggest since the pandemic began, when crude prices collapsed, and would help staunch a plunge in the oil markets over recent months.

But OANDA’s Edward Moya said: “The slide in oil prices is likely over.

“Energy traders turned pessimistic over the summer given global slowdown fears, but now it seems the risks for oil are to the upside.”

And Suvro Sarkar, an energy analyst at DBS Bank, added: “It’s only going to be a matter of time before oil returns to $100 a barrel, especially with supplies set to tighten toward the end of the year,” he said.