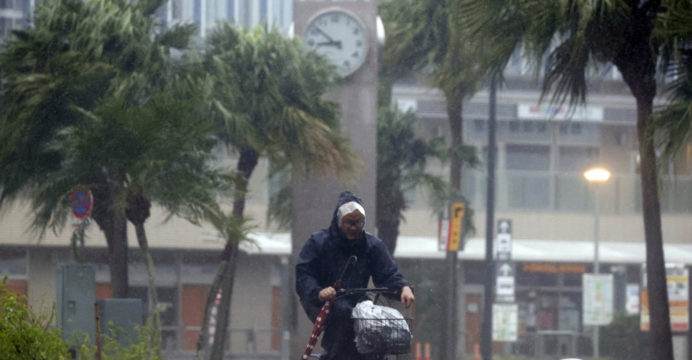 Typhoon Nanmadol made landfall in southwestern Japan on Sunday night, as authorities urged millions of people to take shelter from the powerful storm’s high winds and torrential rain.

The storm officially made landfall around 7 pm local time (1000 GMT) as its eyewall arrived near Kagoshima city, the Japan Meteorological Agency (JMA) said.

It was packing gusts of up to 234 kilometres (146 miles) per hour and had already dumped up to 500 mm of rain in less than 24 hours on parts of southwestern Kyushu region.

At least 20,000 people were spending the night in shelters in Kyushu’s Kagoshima and Miyazaki prefectures, where the JMA has issued a rare “special warning” — an alert that is issued only when it forecasts conditions seen once in several decades.

National broadcaster NHK, which collates information from local authorities, said more than seven million people had been told to move to shelters or take refuge in sturdy buildings to ride out the storm.

The evacuation warnings are not mandatory, and authorities have at times struggled to convince people to move to shelters before extreme weather.

They sought to drive home their concerns about the weather system throughout the weekend.