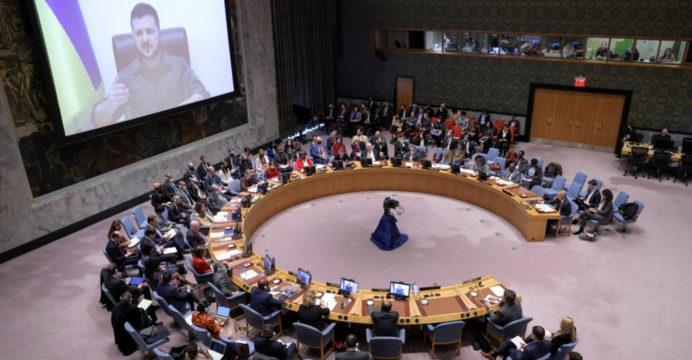 UN General Assembly to allow Zelensky to speak by video

Of the 193 member states, 101 voted in favor of allowing Zelensky to “present a pre-recorded statement” instead of in-person as usually required.

Seven members voted against the proposal, including Russia, which invaded Ukraine in February. Nineteen states abstained.

From Tuesday, some 150 heads of state and government are due to take to the podium to address the General Assembly in New York.

World leaders were allowed to speak by video in 2020 and in 2021 due to the Covid-19 pandemic, but this year the event has gone back to in-person and only those present can speak.

More than 50 states, including the United States, France, South Korea and Turkey, submitted a proposal to make an exception for Zelensky.

The text highlighted situations in which leaders “cannot participate in person in the meetings of the General Assembly for reasons beyond their control owing to ongoing foreign invasion, aggression, military hostilities.” Those in favor decided “that Ukraine may submit a pre-recorded statement of its Head of State” that will be played during the general debate.

The decision noted, however, that the exception was not setting a precedent for future debates.

An amendment introduced by Russia-ally Belarus that would have allowed all leaders prevented from coming to New York in person to send a pre-recorded message was rejected by 67 votes against, 23 for, and 27 abstentions.

Ukraine’s address is slated for the afternoon of September 21, but changes are likely due to many leaders traveling to London for the funeral of Queen Elizabeth II on Monday.