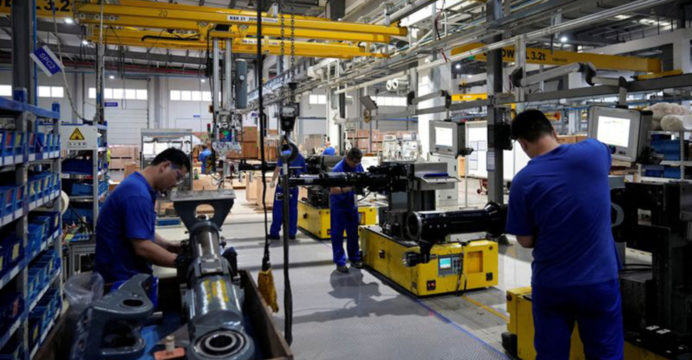 The Purchasing Managers’ Index (PMI), a key gauge of manufacturing activity in the world’s second-biggest economy, came in at 49.4 in August, up from July’s 49.0 but still below the 50-point mark separating growth from contraction, National Bureau of Statistics (NBS) data showed, reports BSS.

Sporadic Covid-19 lockdowns around China have dampened consumer enthusiasm and business confidence, while searing temperatures across large parts of the country this summer prompted power rationing for factories.

The economy faced “unfavourable factors including the epidemic and high temperatures” this month, NBS senior statistician Zhao Qinghe said in a statement.

Zhao said the data showed “the recovery of manufacturing production and demand still needs to be strengthened”, though he noted an uptick in activity
in agricultural product processing and food producers ahead of the mid-Autumn festival on September 10.

China’s manufacturing PMI has been in contraction territory for five out of the past six months, in the wake of a disruptive monthslong lockdown in Shanghai and Covid-related restrictions elsewhere.

But officials show few signs of relaxing strict pandemic curbs, with the southern tech hub of Shenzhen sealing off the world’s largest electronics market this week despite just dozens of daily cases in the city of more than 18 million.

Chinese leaders had originally set a full-year GDP growth target of around 5.5 percent, but with economic expansion of just 0.4 percent in the second quarter, analysts believe it is unlikely to hit that goal.

Zhao noted that while larger businesses saw an expansion in activity this month, small and medium-sized enterprises reported contractions, dragging the overall PMI down.

Meanwhile, China’s non-manufacturing PMI came in at 52.6 points in August, down from 53.8 points in July, NBS data showed.

Statistician Zhao said that the accommodation, food and beverage and telecommunications industries saw “sustained rapid growth” in the past month.