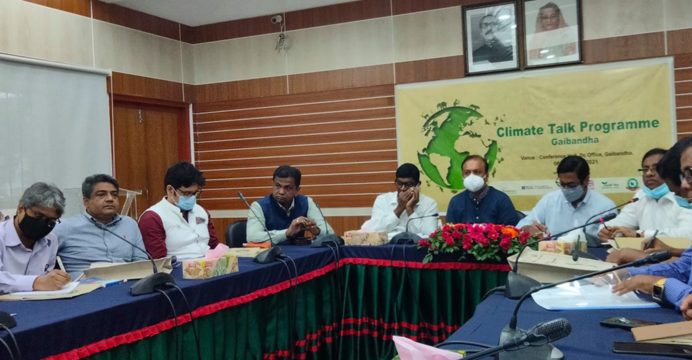 Speakers at the conference stated 4 lakh inhabitants of Gaibandha Sadar, Sundarganj, Fulchhari and Saghata Upazilas have lost everything due to the erosion of the Brahmaputra, Teesta and Jamuna rivers. Although the national budget gives for the development of the people of Char every year, it is not able to use the allocated money appropriately.

The speakers also mentioned that due to the increase in temperature due to climate change, crops are being damaged due to numerous illnesses and drought. Development of sluice gates for drainage, piling to avoid erosion, river dredging and embankment maintenance, digging of canals for drainage of bells, construction of groves to prevent river erosion and construction of khasjam to prevent the relocation of displaced people in river erosion. Acceptance is demanded.

Emphasizing on climate good governance, Gaibandha-1 MP Barrister Shamim Haider Patwari stated Bangladesh emits relatively little carbon. But Bangladesh is one of the countries that are at risk for climate disaster. Especially the underprivileged people in the coastal areas of our country are suffering owing to natural calamities such river erosion, sea-level rise, salt increase, tidal surges, tornadoes, floods etc. As a result, individuals are losing their employment and the likelihood of climate migration is increasing. In reaction to this situation, he stressed on taking revenue-generating projects for the community, promotion of tourism as well as the formation of char boards.