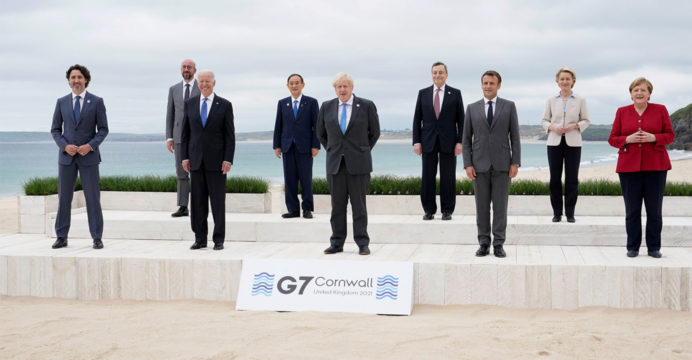 Leaders of the G7 advanced economies are expected to pledge unity on whether or not to officially recognize or sanction the Taliban when they meet virtually to discuss Afghanistan on Tuesday, according to two diplomatic sources.

US allies are still smarting from Washington’s delays in outreach after Kabul fell on August 15, and foreign diplomats in Washington said cooperation will be a key theme of the call.

“The G7 leaders will agree to coordinate on if or when to recognize the Taliban,” said one European diplomat. “And they will commit to continue to work closely together.”

The Taliban’s lightning-fast takeover of the country this month, after US troops started to withdraw and President Ashraf Ghani fled, left foreign governments scrambling and sparked a panicked mass exodus from the country.

Leaders of the US, Britain, Italy, France, Germany, Canada, and Japan may use the possibility of unified official recognition, or renewed sanctions to push the Taliban to comply with pledges to respect women’s rights and international relations.

British Prime Minister Boris Johnson will stress a unified approach during the G7 talks, which will also include Nato Secretary-General Jen Stoltenberg and UN Secretary-General Antonio Guterres, said Karen Pierce, Britain’s envoy to the US.

“We want to start the process of developing a clear plan so that we can all deal with the new Afghan regime in a unified and concerted way,” Pierce told Reuters. “We will judge the new regime by actions, not words.”

Recognition is a political action taken by sovereign states with important consequences, including allowing the Taliban access to the foreign aid relied upon by previous Afghan governments.